Book by Bonnie Costello selected as winner of Warren-Brooks Award 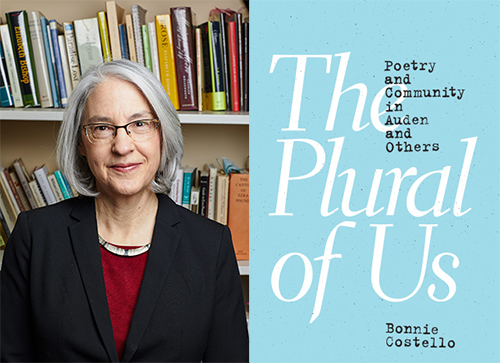 The Plural of Us: Poetry and Community in Auden and Others, written by Bonnie Costello and published by Princeton University Press, has been selected as the 2017 winner of the Robert Penn Warren-Cleanth Brooks Award for outstanding literary scholarship and criticism.

In The Plural of Us, Costello draws our attention to the creative work of the first-person plural in modern poetry. Through its “indeterminacy,” Costello argues, the poetic “we” creates a space for the reader that is at once intensely personal and part of a shared public. The selection committee was deeply impressed with Costello’s interdisciplinary and innovative use of close reading, a technique that Brooks and Warren advocated through critical texts like Understanding Poetry (1938).

Costello is William Fairfield Warren Distinguished Professor of English at Boston University. She has published multiple critical and creative nonfiction essays and monographs, including Planets on Tables: Poetry, Still Life and the Turning World (Cornell University Press, 2008) and Shifting Ground, Reinventing Landscape in Modern American Poetry (Harvard University Press, 2003). Costello earned her Ph.D. in English and American Literature from Cornell University and is a Fellow of the American Academy of Arts and Sciences.

The Warren-Brooks Award, presented each year by the Robert Penn Warren Center at WKU, was established by the Warren family to honor an outstanding work of literary scholarship that embodies the spirit, scope and integrity of the work produced by Warren and his frequent collaborator, Brooks.