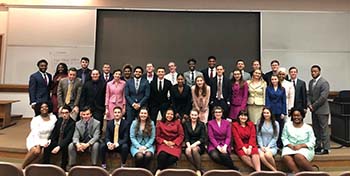 The WKU Forensics Team was crowned team sweepstakes champion at the largest tournament of the fall semester Nov. 4-5 in Peoria, Illinois.

The 70th Annual L.E. Norton Memorial Tournament, hosted by Bradley University, is one of the oldest collegiate forensics tournaments and has often served as a predictor of success at the national tournaments at the end of the school year.

WKU Director of Forensics Ganer Newman praised the quality of the competition at the event. “This is one of the largest tournament we attend before nationals so it always attracts top competition,” he said. “The number of competitors entered in each event made advancing to final rounds incredibly challenging statistically. While the competition was extremely close, our students all pulled together to win the team championship.

“It was particularly rewarding having two students, Lily Nellans and Andrea Ambam, recognized as the top two overall speakers at the tournament. These women are also currently preparing for major national scholarships, a testament to their remarkable discipline this semester.”

Newman praised the coaching staff. “I am incredibly grateful for all the hard work our coaches put in to make our team a success,” he said. “They work tirelessly to motivate our students to develop and deliver nationally competitive arguments. We have a lot of work on our road to nationals in April, but I know our coaches are leading these students in the right direction.”

The team will split in two next week to compete at Carson-Newman University in Jefferson City, Tennessee, and McKendree University, in Lebanon, Illinois.

Results from the 70th Annual “L.E. Norton” Bradley Invitational are as follows: