WKU to observe Veterans Day with ceremonies on Nov. 10 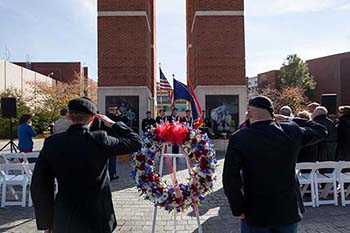 WKU will observe Veterans Day on Nov. 10 with a wreath-laying ceremony followed by the ROTC Hall of Fame Induction Ceremony.

The ceremony will begin at 11 a.m. at Guthrie Bell Tower where all veterans will be honored.

Following the wreath-laying ceremony, the Hall of Fame Induction will be held at 11:30 a.m. in Downing Student Union, room 3020.

Tom Lewman, born in Greensburg, Indiana, in August 1942, attended Millersburg Military Academy for his last two years of high school. His time spent at the academy piqued his interest in the military that would last a lifetime. In the fall of 1960, Lewman entered Western Kentucky State College as an industrial arts major and became a Pershing Rifleman. He was already an expert in drill and ceremony from his time at Millersburg Military Academy, and when in uniform, he was the epitome of a military recruiting poster. He served as the drill and ceremony team commander, was the Pershing Rifles Company Commander, and ultimately served as the Cadet Brigade Commander. Lewman was a Distinguished Military Graduate and commissioned into the Army in August 1964.

Lewman volunteered for Active Duty immediately and was assigned to Fort Knox with A Company, 54th Infantry as a platoon leader. After his Infantry Officer’s training, Lewman completed both the demanding Ranger Course and Airborne Course at Fort Benning. As was his nature, Lewman wanted to go to the sound of the guns and the Department of the Army quickly accepted his offer to go into combat.

Lewman’s first tour in September 1966 took him to the 25th Infantry Division as a platoon leader. Shortly thereafter, he was promoted to Captain and assumed command of A Company. Lewman excelled while leading his soldiers in combat and received the Silver Star for gallantry in action. Lewman’s company was the lead element of a battalion size airmobile assault. Upon landing, his unit came under intense and accurate small arms fire. After assessing the situation, he sprang into action and led an assault against the enemy, killing two Viet Cong and routing the others. All the while, he exposed himself to enemy fire and directed artillery fire and air strikes in on the Viet Cong positions. He was a personal example to his soldiers of coolness under fire, personal bravery and devotion to duty.

Lewman volunteered at attend the Special Forces Officers’ Course at the JFK Special Warfare School at Fort Bragg. In September 1968, he was fully qualified Green Beret Soldier and assigned to the 5th Special Forces Group in Vietnam and became an A Team Detachment Commander at a camp in the Mekong Delta with indigenous Vietnamese forces. Lewman volunteered to be inserted with a small rescue force to locate and rescue two American advisors. His battle buddy was wounded during the firefight and at great risk to himself, Lewman saved his wounded comrade and carried him to a secure landing zone where he was medically evacuated. Their assault in the search area caused enough of a distraction to the enemy that they were able to return to their base camp relatively unscathed. He was awarded the Bronze Star with V Device for the rescue operation. During both of his combat tours, he netted two additional Bronze Stars, two Purple Hearts, an Army Commendation Medal and five Air Medals, a Combat Infantryman’s Badge, Vietnamese Special Forces Jump Wings and numerous Vietnamese Gallantry and Civil Action Medals.

He went to Korea to command the 128 Assault Helicopter Company, returned to the United States to the 4th Infantry Division as the S-3 and XO of the 1st Battalion and later commanded the 4th Aviation Company. He continued his military affiliation as a military analyst with the BDM Corporation performing collective training research for the US Army Research Institute. In the fall of 1982, Lewman attended the AH-1 Fully Modernized Cobra Transition at Fort Rucker, Alabama, with a follow-on assignment as commander of the 503D Combat Aviation Battalion in Hannu, Germany.  In addition to his combat medals, Lewman earned the Meritorious Service Medal with four oak leaf cluster, the Army Commendation Medal with OLC, the Vietnamese Cross of Gallantry Silver Award, Senior Army Aviator Wings, Ranger Tab, Special Forces Tab and Airborne Wings.