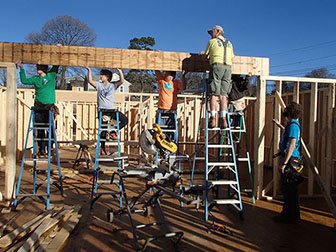 “The participants have chosen to take this trip instead of going home because they are dedicated to make a difference with their time away from school,” said Bryan Reaka, chapter advisor and faculty member in WKU’s School of Engineering and Applied Sciences.

The campus chapter will be taking a trip during WKU’s winter break and spring break. For information about those opportunities, contact habitat@wku.edu or www.wku.edu/habitat.