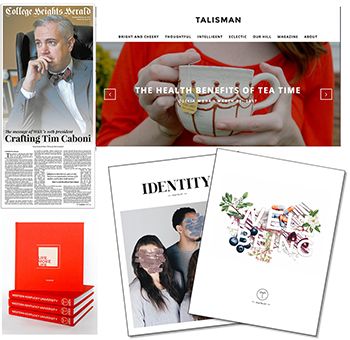 For the first time, WKU Student Publications has four finalists for national Pacemaker awards -- one in each category in which the Associated Collegiate Press honors the nation's best student-run publications.

WKU's finalists for the honors, which will be awarded in October at the National College Media Convention in Dallas, are:

"Having a finalist in every category for the Pacemakers is extraordinary," said Chuck Clark, director of WKU Student Publications. "It shows our students know how to think big, work hard and execute well. This says our students are among the very best in the country at producing exceptional publications."

This is the first year WKU has had student-run publications eligible in all four Pacemaker categories.

"The transition of the Talisman from a yearbook to a life and culture magazine, and the timing of the yearbook awards, gave us a one-time opportunity to compete in all four categories," Clark said. "To emerge as a finalist in each is quite extraordinary, especially with Talisman reaching that level of quality in its first year as a magazine."

Talisman's final edition as a yearbook covered the 2015-16 year. Its inaugural issues as a life and culture magazine were in November 2016 and April 2017.

The Pacemaker is considered the most prestigious award a student-run publication can earn. WKU's student publications have been awarded 33 Pacemakers through the years -- 18 for Talisman and 15 for the College Heights Herald, earning each publication a spot in the ACP Hall of Fame.

Editors for the periods the Pacemaker contest covered were: