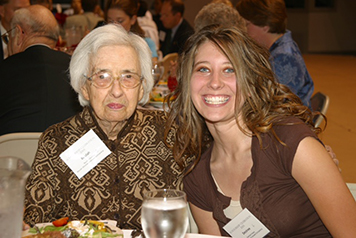 Beulah R. Winchel (left), pictured with a scholarship recipient in 2005.

WKU has received an estate gift of more than $2.5 million from the late Beulah R. Winchel.

Winchel, who passed away in 2015 at the age of 103, was born in the Franks community of Breckinridge County on Jan. 8, 1912. She received her teaching degree at WKU, then known as Western Kentucky State Teachers College, in 1939. She later received her master’s degree in Library Sciences from Peabody College and was a member of the Breckinridge County Retired Teachers Association.

Her teaching career spanned many decades, schools and continents beginning at a one-room school in Axtel, Ky. After retirement, she returned to Hardinsburg as a librarian in the Breckinridge County School System, and she also taught in several schools in Louisville. As a member of the Army Civilian Special Services, she served as Education Specialist and Librarian in Kyoto, Japan; Karlshule and Frankfurt, Germany; Orleans, France; and Ft. Lauderdale, Fla.

Winchel was known to recall her days at WKU fondly, and she often credited her unique professional life to the comprehensive training she received at WKU. In an interview in 2001, Winchel said, “I was willing to consider a gift to Western because of my experience there as a student. If I hadn’t gone to Western, I wouldn’t have been able to experience the things I did later in life.”

“Ms. Winchel was a very special lady, and I feel very honored to have gotten to know her,” said Dr. Donald Smith, President of the College Heights Foundation. “She included areas at WKU in her estate plans that were important to her, and through those provisions, several areas will receive critical annual funding through an endowment that will last in perpetuity. I think she would be very happy to know her wishes were being fulfilled.”

The Beulah Winchel Trust, which will be administered through the College Heights Foundation, was outlined in 1998 to support four distinct areas at WKU.

Of the spendable income from the annual endowment earnings, 45 percent will be allocated to the Beulah R. Winchel Scholarship Fund. This scholarship benefits students from the Commonwealth of Kentucky who are pursuing a degree in Elementary Education, Middle Grades Education or Agriculture.

“What a wonderful way to celebrate and honor someone’s life,” said WKU President Timothy C. Caboni. “I’m sorry I didn’t get to meet Ms. Winchel, but I am very grateful for her forward-thinking approach and willingness to include the University in her estate plans. Because of her generous bequest, the University will be able to continue transforming the lives of our students and serving as an integral piece of the southcentral Kentucky community.”