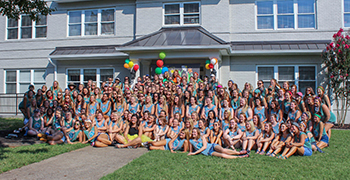 The WKU chapter of Kappa Delta Sorority will have plenty to celebrate during Parents Weekend as it formally receives Kappa Delta’s highest honor for a collegiate chapter. Before an anticipated gathering of more than 300 KD collegians and alumnae, parents and university administrators, Kappa Delta National President Tricia Ruma Spence will present the 2017 Council Award to the entire chapter on Saturday (Sept. 23).

The award was announced July 1 at the sorority’s 62nd Biennial National Convention in Phoenix where WKU’s Delta Gamma Chapter was selected from among Kappa Delta’s Merit Chapters that comprise the top 10 percent of the sorority’s 164 collegiate chapters nationwide. The Council Award recognizes the collegiate chapter that demonstrates the highest level of excellence during the previous biennium in operations, academics, recruitment, community service and sisterhood.

At convention, Delta Gamma-Western Kentucky also won individual awards for its financial responsibility, participation in national communications, and outstanding Shamrock events, including Shenanigans and Shamrock Shoot-Out, which raise awareness and funds for the prevention of child abuse. On campus, the KD chapter has won a record 30 Greek Week titles and ended the 2017 academic year as the recipient of WKU’s Karen Towell Sisterhood Award, the highest campus honor for a sorority. Former chapter president Jordan Webb was named 2017 Greek Woman of the Year and now serves as a traveling consultant for national Kappa Delta.

Since the chapter was established at WKU in 1965, its members have served on the National Council and National Leadership Team, as leadership development consultants, Corre Anding Stegall Collegiate Leadership Award and scholarship recipients, Greek Women of the Year, and as leaders in the chapter, on local advisory boards and in alumnae chapters nationwide.

National President Tricia Spence is an alumna of KD’s Epsilon Alpha Chapter at Missouri University of Science and Technology. She holds a doctorate in information sciences and technology from Pennsylvania State University and is employed as vice president of enterprise planning and project management for Prudential in New York City.

National Vice President Susan Stockton graduated from WKU in 1987 and traveled as a KD national collegiate advisor before earning a law degree from the University of Kentucky. She previously served as senior counsel for General Electric Company, a position that gave her international experience on three different continents. She now resides with her husband and two children in Los Angeles.