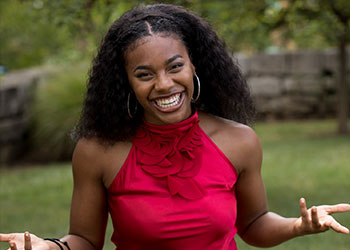 Tayland Ratliff may only be a freshman, but she has a bit of a leg up over her classmates. Ratliff, a Marketing major from Lafayette, Louisiana, attended the Summer Early Entry program at WKU. The five-week program is designed to bridge the gap between high school and university level courses and help incoming freshmen become familiarized with a new learning environment.

“I did the Summer Early Entry Program to get a jumpstart into school, get used to the campus, and get to know my teachers,” Tayland said. “If I didn’t do the program, I don’t think I would be as prepared for the semester as I have been. And now I’m directing other freshman around campus! It’s definitely a perk.”

Tayland's experiences with speech and debate in high school paved her road to success from Louisiana to WKU. After performing in theatre and musical theatre productions when she was younger, she was selected for her high school’s Speech and Debate team.

“I did it all through high school,” said Tayland. “I competed at multiple national tournaments and did well, which got me noticed by WKU [for the Forensics team] and a few other universities. My senior year, I spent time trying to decide which school to go to and I narrowed it down to Western. I’m glad I did, because I love it here so far!”

Tayland chose WKU not only for the award-winning Forensics team, but also for a sense of community she didn’t see elsewhere.

“Most of the other schools I visited were nice, but they didn’t have that feeling of home that I wanted college to have,” Tayland said. “I may miss home, but everyone misses home. So far, my college experience has been great!”

Because of her positive experience with the Summer Early Entry Program, Tayland is settling in to life at WKU and is excited to be on the WKU Forensics team. After graduation, she plans to pursue social media marketing and fulfill her dream of acting.