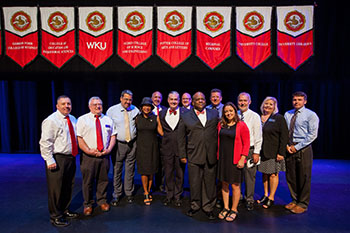 Sodexo, world leader in Quality of Life Services and the University’s partner in facilities management, has made a gift commitment to WKU to establish the Sodexo Scholarship Fund to support their employees, as well as their dependents, in the pursuit of higher education at any campus of WKU. Sodexo has pledged $650,000 in scholarship assistance over the next 13 years with $50,000 in scholarships awarded in a given academic year.

As part of their mission, Sodexo strives to improve the quality of life of its employees, and through the creation of this scholarship, they are fulfilling that commitment. The Sodexo employees who serve on WKU campuses help the institution operate and provide invaluable services to WKU faculty, staff and students.

“Through this scholarship fund, Sodexo is providing critical financial assistance for employees and their dependents to seize an opportunity to further their own personal and career development at WKU,” said WKU President Timothy C. Caboni. “This commitment from Sodexo honors a very important group within the WKU family.”

“We are pleased to have this scholarship program reflect our company values by providing additional development opportunities for our employees and their families,” said Edwin Morgan, Sodexo District Manager. “We believe this program will be consistent in making every day a better day with taking advantage of the educational opportunities provided by the partnership between Sodexo and Western Kentucky University.”

The first scholarship awards will be made for the 2017-2018 academic year. First preference for recipients will be given to Sodexo employees who work at any WKU campus, and second preference will be given to dependents of Sodexo employees who work at any WKU campus. If unclaimed by the first two groups, third preference will be given to any WKU student who is pursuing a degree in Business or Construction Management with the goal of disbursing the full $50,000 in any given year. This scholarship will be offered in two different types: Facilities Scholarships of $2,500 and Book Scholarships of $625. The Facilities Scholarship may be used toward tuition, while the Book Scholarship may only be used toward purchasing textbooks. Recipients of the Sodexo Scholarship are eligible for both types, and recipients may receive up to $3,125 toward their higher education at WKU.

The College Heights Foundation will administer the Sodexo Scholarship Fund.

“Although this award is not automatically renewable, recipients may reapply for consideration in future years,” said Dr. Donald Smith, President of the College Heights Foundation. “This scholarship fund will undoubtedly create life-changing opportunities for Sodexo employees and their dependents, and the College Heights Foundation at WKU is extremely proud to be a part of that.”

Sodexo in North America: Sodexo USA is an American business that is part of a global, Fortune 500 company with a presence in 80 countries. Delivering more than 100 services across North America that enhance organizational performance, contribute to local communities and improve quality of life, Sodexo is a leading provider of sustainable, integrated facilities management and food service operations. It employs 123,000 Americans at 12,500 sites across the country and indirectly supports tens of thousands of additional U.S. jobs through its annual purchases of $9.2 billion in goods and services from small to large American businesses. In support of local communities across the U.S., Sodexo Stop Hunger Foundation has contributed more than $29 million since 1999 to help feed children in America impacted by hunger.