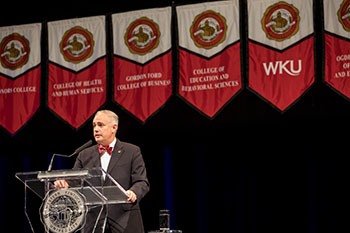 Caboni, who began his presidency July 1, said he is often asked about his vision for WKU. “I would argue a more important question is ‘What is our collective vision for our university,’” he said. (More: The full text of President Caboni’s Convocation address can be found at www.wku.edu/convocation.)

“During the next several months, we will engage in an intensive strategic planning process that will reflect the collective vision of our stakeholders and ensure that we are focusing on the core mission of a student-centered, applied research university, which is to inspire innovation, elevate communities and transform lives,” Caboni said.

That process will be led by a 10-to-14-member steering committee, which he will co-chair along with a faculty member to be named in the next few weeks. Working groups will have five broad areas of focus: academic innovation and excellence; student success and experience; diversity, equity and inclusion; scholarship and creative endeavors; and budgeting, efficiency and infrastructure.

“This strategic planning process will be inclusive and will engage every stakeholder group in meaningful conversations about our shared aspirations,” Caboni said. “It will ensure that we use data to guide our strategic choices going forward, and the end result will be a practical and revisable roadmap for our future.”

“This year we will increase our focus on yielding a greater number of those admitted students by making sure we convey in a persuasive and compelling manner what it means to be a Hilltopper and what makes the WKU experience unique and valuable,” he said. “Students need to know that this is a place where they can come and have experiences alongside faculty who know their name, that we are a campus community that cares deeply about their success, and that we want them to graduate in four years.”

WKU will continue to refine its financial aid policy and place a priority on private fundraising to address the strain felt by students in need. “We must strive to help our students leave WKU with a manageable level of debt,” Caboni said.

To help retain students after their first year, and make sure they graduate in four years, WKU has hired five professional advisors who will focus on intrusive, proactive and student-centered advising for students with undeclared majors and populations such as first generation, low-income and underrepresented minority students.

In addition, new software has been employed to improve the course registration process and improve communication between students and advisors, and advisors are undergoing additional professional development.

Caboni also announced the addition of three living learning communities in Housing and Residence Life for this fall: ISEC Academy for students involved in the Intercultural Student Engagement Center; Top of the Class for teacher education students; and the WISE Living Community for Women in Science and Engineering.

WKU will continue its focus on the values of diversity by implementing recommendations that the task force on diversity, equity and inclusion finalized earlier this year.

The importance placed on international experiences—both in recruiting international students and sending American students to study abroad—is part of what makes WKU distinctive, Caboni said. Those efforts are currently housed across various campus departments and under separate leadership and direction.

“To help simplify and streamline this work, we will need to undergo an administrative restructuring to bring all international responsibilities under a single umbrella,” he said.

Caboni also announced two programs “that signal our community’s reaffirmation of the importance of human capital as our most valuable asset.”

WKU’s partner in facilities management, Sodexo, has pledged $650,000 over 13 years to fund scholarships for their employees who work on the WKU campus—and their dependents—to attend WKU. The first scholarships will be awarded this fall.

WKU will also reinstate the spousal tuition benefit this fall, providing tuition reduction for the spouses of WKU employees.

“Even in times of scarce resources, we must continue to seek creative ways to ensure we are investing in people, especially those who serve this campus,” he said.