'Kentucky in the Great War' on display at Kentucky Building 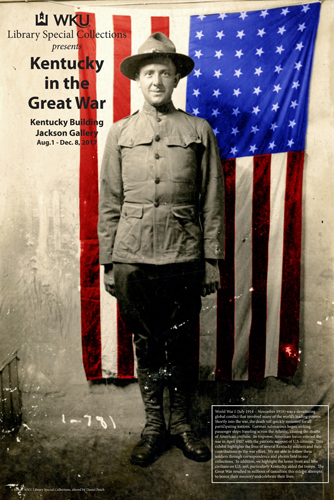 WKU Library Special Collections recently opened Kentucky in the Great War exhibit in the Jackson Gallery of the Kentucky Building. The exhibit will be free and open to the public 9 a.m. to 4 p.m. Monday through Friday until Dec. 8.

“There is a reason they called World War 1 the ‘Great War’,” said Library Special Collections Department Head Jonathan Jeffrey. “At the time many believed it would solve the western world’s political woes. Also, the scale and intensity of it was awe inspiring and appalling. Our exhibit pays tribute to those who served in the military and those who faithfully did their part on the home front. We are so pleased to exhibit a variety of documents and artifacts, ranging from sheet music to a doughboy doll. It is a testament to the scope of the conflict and the fine collections housed in WKU’s Kentucky Building.”

According to Jeffrey, the exhibit highlights the lives of several Kentucky soldiers and their contributions to the war effort, following several through correspondence and photos held in the collections. In addition, civilians are featured on U.S. soil, particularly Kentucky, who aided the troops. The Great War resulted in millions of casualties; this exhibit attempts to honor their memory and celebrate their lives.

There are community presentations being planned in conjunction with the exhibit. The first presentation scheduled will be Dr. David Lee presenting “Sergeant York: An American Hero” at 7 p.m. Sept. 19 in the Western Room of the Kentucky Building.  A discussion involving veterans and some universal topics related to conflicts will be held in mid-November.

For information about the exhibition and future presentations, contact Jonathan Jeffrey at (270) 745-5265.