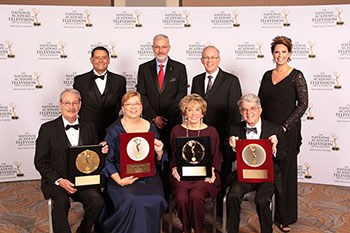 WKU PBS, WKU’s Public Television Service, had an impressive showing at the 53rd Annual Ohio Valley Emmy Awards with a quartet of honors during an Aug. 5 ceremony in Lawrenceburg, Indiana.

Work on the WKU PBS series Lost River Sessions (LRS) was recognized with Emmy Awards in four categories.  In the Arts/Entertainment – Program category, Darius Barati (’07), Neil Purcell (’15), Mark Toon (’15), and James Pearson accepted awards for their work on the show. In the craft categories of Lighting and Director - Non-Live (Post-Produced), Barati was also recognized with an award for his LRS efforts.  Likewise, Pearson received an award in the Audio craft category for Lost River Sessions: Erin Rae.

“The term ‘it takes a village’ is probably the most accurate way of describing the process behind LRS. So many people at our station, the musicians featured, WKU and the surrounding communities have selflessly poured their time, talents and resources into this show, and these awards are a direct acknowledgement of their efforts. The statues may sit on a mantel, but the recognition behind them belongs to everyone that has ever had a hand in the making of Lost River Sessions,” Barati said.

“It’s amazing to be recognized for my work with Darius, Mark and James on LRS. I feel like it’s a testament to the amount I've been able to grow in this program, both as a student and professional. This award is not only exciting for me as confirmation that I’m in the right place, but also motivation to elevate our students and my work to the next level,” Purcell said.

“It was an unbelievable honor to be able to stand and accept this award with such amazing, talented people. Working on Lost River Sessions and at WKU PBS greatly helped me find my passion for broadcasting, and pushed me to excel in all aspects of my career. This is only the beginning for LRS, and I can’t wait to see what the future brings for this program and those involved,” Toon said.

Toon is now working at Red Arrow Industries (RAI) in Knoxville, Tennessee, as an assistant editor. RAI was founded by two WKU and WKU PBS alumni.  Executive Producer and Co-Owner Ryan Hardison (’00) said, “Mark is a valued employee and an example of the benefits WKU students gain through opportunities at WKU PBS.”

Cheryl Beckley, a 1980 WKU graduate, was recognized with the Silver Circle Award, one of the highest honors given by the Ohio Valley Chapter of National Academy of Television Arts & Sciences.

“Part of what we do at WKU PBS is bring new storytellers along, teach them the skills to bring their passions to life and to do it in an honest and honorable way,” Beckley said during her Silver Circle speech. “What we do matters to the people we serve and the future we hope to mold, but we should also shine a light on the past, letting everyone remember the successes and sacrifices of those who came before us that allow us to have the freedoms we enjoy and a profession we love.”

The WKU PBS student crew served as the production team for the awards ceremony’s Back Stage Live Show (BSL).  Working alongside BSL Producer Karen Webb (’16), 10 members of the crew set up and operated equipment over two days to support the four-plus hour broadcast that was streamed via Facebook LIVE.

“We strive to cultivate an environment where creativity and hard work can thrive and that benefits the communities we serve,” WKU PBS Production Manager Jordan Basham said. “The recognition from our peers, provided in the form of these nominations and awards, serve in part as acknowledgement of those efforts. We find validation in our workforce development efforts through our student crew’s success on projects like the chapter’s Back Stage Live Show and the contributions they make on a daily basis to our operation.”

David Brinkley, Director of Public Broadcasting, said: “Every single day it is an honor to work in such a creative, educational and professional environment.  The stories, educational content and entertainment that we are able to pass along to our communities is a vital to our region.  Being able to connect our services to student engagement, workforce development and local economic growth is essential for our mission as public broadcasters.  It is an honor to represent WKU at this level.”

WKU President Timothy C. Caboni said the recognition for WKU PBS’ work and support for the community was well deserved. “What an incredible night—four Emmys for their amazing work,” he said.

Robbin Taylor, WKU’s vice president of Public Affairs, said: “The WKU PBS team is an incredibly talented group of men and women who mentor students and serve our regional communities.  They love doing the Lost River Sessions series and this is well-deserved recognition for the energy, time and passion they bring to this program. We're especially proud of the 25-year service recognition for Cheryl Beckley, who has devoted her career to WKU PBS.”

The Emmy awards judge entries on their own merits and do not compare entries to one another. It is for that reason that the Emmys are unique because there can be one award, more than one award, or no award given in any given category. The Emmy Award is the highest award given in the television industry and is considered the TV equivalent to the Academy Awards (for film), Grammy Awards (for music) and Tony Awards (for stage)

WKU’s Public Television Service has been nominated in each of the past 14 years, receiving 23 awards and has two Silver Circle Inductees.

Western Kentucky University tied with one other public, four-year institution for the highest score in the state on the Kentucky Council on Postsecondary Education’s (CPE) annual diversity, equity, and inclusion (DEI) report.