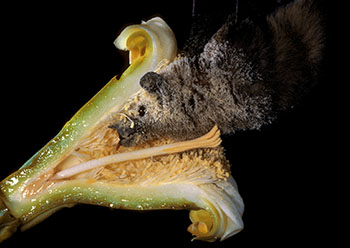 Caption: Lesser long-nosed bats are pollinators that feed on the nectar of agave and columnar cacti, such as this saguaro cactus. (Photo by Merlin D. Tuttle, Bat Conservation International)

A woman sits on her couch, pulls out her laptop and watches a video of bats. As she watches, she records how many bats she sees, what the bats are doing, and if there are any other animals in the video. In other parts of the country, and even the world, similar scenes are taking place as thousands of people participate in a research project called Arizona BatWatch. They are helping scientists learn more about the behaviors of a group of bats located in southwestern Arizona.

Arizona BatWatch is an online research project that engages the public in scientific research through citizen science. Anyone can participate in the project by going to www.ArizonaBatWatch.org. After reading the short tutorial to learn what to look for, participants watch 10-second videos of bats flying around an abandoned mine and answer three questions about what they see in the video. Arizona BatWatch launched its second season of videos Tuesday (Aug. 8).

“We are excited about the new season of videos,” said Shannon Trimboli, the creator of Arizona BatWatch and Education Coordinator of the Mammoth Cave International Center for Science and Learning, a partnership between WKU and Mammoth Cave National Park. “Recently we ran a short trial to test some new options with the project. We received great feedback from our participants and based on that feedback we are making a few changes to the project, such as shortening the videos from 20 seconds to 10 seconds.”

Arizona BatWatch launched its first season of videos in October 2016. The project uses videos from Coronado National Memorial located in southwestern Arizona. The bats in the videos are lesser long-nosed bats (Leptonycteris curasoae). The lesser long-nosed bat is an endangered species that lives in Mexico, Arizona and New Mexico. It is a pollinator and feeds on the nectar and pollen of agave and columnar cacti. Lesser long-nosed bats will also visit hummingbird feeders that are left outside overnight.

“We are thankful to everyone who has participated in Arizona BatWatch so far,” Trimboli said. “In the past nine months over 2,000 people from around the world have helped to classify over 30,000 videos.”

In addition to the opportunity to participate in the research, the Arizona BatWatch website also includes educational opportunities. The website includes detailed information about the project, lesser long-nosed bats, general bat-related questions and the data being collected. It also includes discussion boards where participants can ask questions and share their findings.

“We invite everyone to participate in Arizona BatWatch,” Trimboli said. “It is a great way to get involved and help scientists learn more about bats.”

For information about Arizona BatWatch, contact Shannon Trimboli, Education Coordinator of the Mammoth Cave International Center for Science and Learning, 270-758-2422 or shannon.trimboli@wku.edu

The Mammoth Cave International Center for Science and Learning is a partnership between WKU and Mammoth Cave National Park. At WKU, it is housed within the Dean’s Office of Ogden College of Science and Engineering.