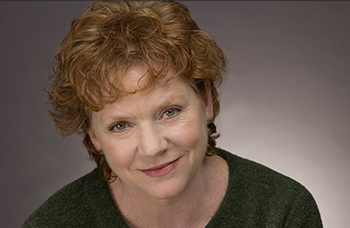 Becky Ann Baker, a 1975 WKU graduate, is a first-time nominee for a Primetime Emmy Award for her work on the HBO series Girls.

Baker, who has appeared on television, film and Broadway, was nominated in the category of Outstanding Guest Actress in a Comedy Series for her portrayal of Loreen Horvath, the mother of the lead character played by Lena Dunham.

Baker was in a recording studio doing audio work for The Night Shift on NBC when Dunham called with news about the Emmy nomination. “I was sobbing,” Baker said. “My reaction was much more dramatic than I’d expected.”

In a category that includes Melissa McCarthy’s portrayal of Sean Spicer on Saturday Night Live and the late Carrie Fisher for her role in the Amazon series Catastrophe, Baker said the nomination was “truly unexpected” and “was especially nice because it was the show’s final season.”

The Emmy Awards will be presented Sept. 17 but guest actor and actress awards are announced the week before with the creative awards so “we don’t go to the televised Emmys unless we win,” Baker said.

Loreen Horvath, Baker’s character on Girls, “has resonated with people.”

In the first episode of the series, Baker’s character and her TV husband, played by Peter Scolari, tell Lena Dunham’s character, Hannah, that they’re going to “stop enabling her” and that there will be “no more money.”

“The Today show even used that clip” when talking about a generation that feels they’re entitled, Baker said. “My parents were strict -- a lot different take on how you approach the world.”

Baker, who was born in Fort Knox, “was an Army brat. We moved around, so I wasn’t exposed to theatre. I always had a fantasy life of moving to New York City and being an actor. I had leads in high school and wanted to move to New York, but my parents said no.”

So she enrolled at WKU, where in addition to theatre, she was a voice minor and toured with the WKU choir. “I had an amazing experience,” Baker said.

Her advice to current students is simple – “basic storytelling.”

“A lot of people are drawn to being on stage” for the glamour, she said, but “we are the storytellers of the tribe.”