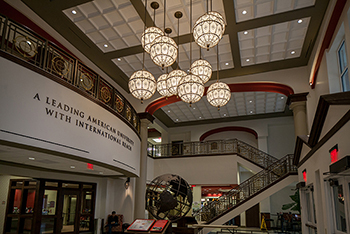 The Office of Scholar Development at WKU has awarded 16 WKU students more than $23,000 in Lifetime Experience Grants during the 2016-17 academic year.

The awards are designed to enhance students’ competitiveness for national scholarships by supporting research, creative activities, international study, student-designed service or other scholarly activities. As a condition of their awards, recipients of LTE grants apply for selected nationally-competitive scholarships relevant to their interests and goals. The LTE grant program was initially funded by a grant from the WKU Sisterhood in 2012.

“National scholarship competitions are looking for students who are deeply engaged in their academic interests.  The LTE grants help students take advantage of the breadth of opportunities available to them at WKU while increasing their competitiveness for national scholarships,” said Dr. Audra Jennings, Director of the Office of Scholar Development.

For example, Deborah Flynn, a 2017 graduate in geology, traveled to Addis Adaba, Ethiopia, to conduct research on rock permeability along the Blue Nile River.  Mentored by Dr. Nahid Gani in the Department of Geography and Geology, Flynn was selected as an alternate for a Fulbright U.S. Student Grant to Ethiopia to continue her research in hydrology.

About the WKU Sisterhood: Chaired by Julie Ransdell and Kristen Miller, the WKU Sisterhood is an organization of women advancing WKU priorities through philanthropic engagement and a collective voice. Since 2010 the Sisterhood has held an annual competition for units and programs affiliated with WKU to receive up to $40,000 in funding for high-impact projects. The Office of Scholar Development’s LTE program was awarded the grant in Fall 2012.