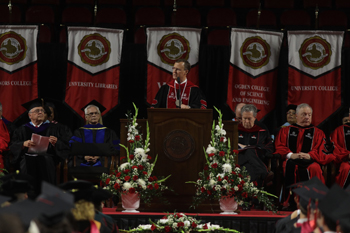 WKU began its 181st Commencement on Friday night with the recognition of nearly 700 graduates of The Graduate School.

WKU President Gary A. Ransdell encouraged members of the Class of 2017 to put their education, talent and passion to use to build outstanding communities and workplaces. “Our passions and our inspirations drive us and give us a strong sense of purpose, and they are a great source of our pride and happiness,” he said. “Lead by example and use the WKU motto, The Spirit Makes the Master, as a guiding principle in your life. That spirit blends the heart with the mind – and both are at the core of almost every achievement.”

Wellman, the daughter of Kimberly and Gary Canada and the wife of Gregory Wellman, received her Master of Arts in Applied Economics. “Jessica is an excellent example of how students who work hard can grow and flourish at WKU because she received WKU’s top undergraduate academic honor last year,” said John D. Minton Jr., chief justice of the Kentucky Supreme Court.

The award is named for Minton’s father who was WKU’s first graduate dean and served as vice president for Administrative Affairs and as WKU’s fifth president.

Wellman will spend the 2017-18 academic year in South Africa on a Fulbright Scholar Research Grant studying how land grants are used for poverty alleviation. Afterward, she will pursue a Ph.D. in economics at the University of Virginia. More: Read more about the 2017 Minton Award winner.

WKU also recognized the following six students as the outstanding graduate student within each academic college:

WKU’s Commencement Weekend continues Saturday (May 13) with three undergraduate ceremonies and the graduation of The Gatton Academy’s 10th class.

The Gatton Academy of Mathematics and Science in Kentucky will recognize 59 students from 37 counties in the Class of 2017, its 10th graduating class. The ceremony will begin at 1 p.m. May 13 at Van Meter Hall. Guest speaker will be Dr. Julia Carter, President of the Wood Hudson Cancer Research Laboratory.

WKU Elizabethtown-Fort Knox will host a commencement ceremony at 3 p.m. (Eastern time) Sunday (May 14) at the Hardin County Schools Performing Arts Center, 384 W.A. Jenkins Road, Elizabethtown. The keynote speaker will be Dr. Ransdell. Student speaker will be Edward Razo of Radcliff, a social work major and member of the Class of 2017.

WKU Owensboro will host a commencement ceremony at 6:30 p.m. Monday (May 15) at the RiverPark Center, 101 Daviess St., Owensboro. Keynote speaker will be Dr. Ransdell. Student speaker will be Joshua Holder of Owensboro, an elementary education major and member of the Class of 2017.