WKU prepares for 2017-2018 International Year of Bosnia and Herzegovina 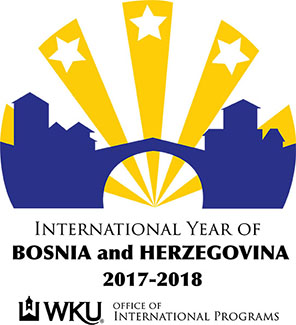 WKU’s Office of International Programs (OIP) is preparing to launch the 2017-2018 International Year of (IYO) Bosnia and Herzegovina.

The IYO program places a yearlong spotlight on a specific country and provides WKU and Bowling Green with a greater understanding of that country’s history and culture and its intersections with the U.S. The IYO is implemented through augmented academic courses that feature country-specific content and special events that highlight varying aspects of the country. The IYO Bosnia and Herzegovina, which will be the fourth iteration of the annual internationalization initiative, comes after a successful yearlong focus on South Korea during 2016-17.

OIP released a teaser calendar for next year’s IYO Bosnia and Herzegovina to the WKU campus community via email with the hope of generating excitement about the forthcoming IYO and encouraging cross-campus participation. Alongside the next year’s co-academic programming, WKU students will encounter Bosnia-related content in more than 30 academic courses.

Much of the current calendar’s structure has come from the IYO Bosnia planning committee, comprised of faculty and staff as well as community members. Starting in the spring of 2016, the committee met regularly to identify key themes, generate event ideas, and promote participation.

OIP Programming Coordinator Lauren Reyes expects the IYO Bosnia and Herzegovina calendar to expand over the course of the summer and even into the 2017-18 academic year, with a significant number of events stemming from Bowling Green’s robust Bosnian-American community.

“This is an exciting prospect for OIP as the local community represents not just a valuable source of cultural knowledge, but also a prime example of the importance of global learning and the very reason for programs like the IYO,” Reyes said.

Brent Björkman, director of the Kentucky Museum and member of the IYO Bosnia planning committee, recognized in the IYO Bosnia and Herzegovina an ideal opportunity to explore the stories of local Bosnian-American community. Björkman, along with faculty and staff in the Kentucky Folklife Program, has teamed up with Bowling Green’s Bosnian residents to gather and transform scores of oral interviews and complementary personal artifacts into an interactive ethnographic exhibit that will debut in September.

“Theirs is a history and culture that deserves a closer look,” Björkman said. “As local entrepreneurs and employers, colleagues and neighbors, it behooves us all to gain a better understanding of their stories and cultural heritage. The Kentucky Museum and Kentucky Folklife Program are excited to be partnering with the IYO Bosnia and Herzegovina to shed light on the experiences of our Bosnian-American community members.”

Faculty members participating in the 2017 Zuheir Sofia Endowed International Faculty Seminar (ZSEIFS) to Bosnia will also make their marks on the corresponding IYO. Following a semester of intensive interdisciplinary study and a multi-week program in Bosnia, the team of eight faculty members will incorporate new content into courses and events for the campus community and parlay new connections into collaborative research and creative projects. Dr. Jerry Daday (Executive Director, Center for Innovative Teaching and Learning) and Gina Dzeldina (Bowling Green community member and WKU alumna) are leading the ZSEIFS to Bosnia.

The release of the preliminary calendar also serves as the unveiling of the logo for the next IYO.  The winning logo was selected from campus-wide contest; designed by WKU senior Nikki Gross, the logo will serve as the visual emblem for the upcoming yearlong investigation of Bosnia.

Following the IYO Bosnia and Herzegovina, WKU will embark on its fifth IYO with an emphasis on Cuba. Faculty members interested in expanding their knowledge of and connections to Cuba are encouraged to apply for the ZSEIFS to Cuba in 2018, which will be co-led by Dr. Andrew McMichael, associate dean of Potter College of Arts & Letters, and Jeanie Adams-Smith, professor of Photojournalism. For information, visit www.wku.edu/zseifs.

About the ZSEIFS: The Zuheir Sofia Endowment was created to facilitate the mission of the Office of International Programs, which endeavors to provide leadership in the development of a strong international profile. Zuheir Sofia, a 1969 WKU graduate and 2014 Honorary Doctorate recipient, is chairman, president and CEO of Business Bank of Florida Corp.