WKU to rename building in honor of Rep. Jody Richards 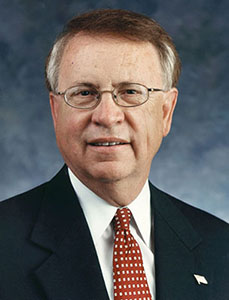 Mass Media and Technology Hall will become Jody Richards Hall during a May 4 ceremony. Richards, whose 14-year tenure as Speaker of the Kentucky House of Representatives was the longest in state history, was instrumental in securing state funding to construct MMTH and at least seven other buildings during his 42 years in office.

“No elected official has represented WKU as passionately and delivered as much to WKU as Rep. Jody Richards,” WKU President Gary A. Ransdell said. “The fact that he is Bowling Green’s own, and is the longest serving Speaker of Kentucky’s House of Representatives in our Commonwealth’s history, is reason enough to commemorate him on WKU’s campus. I am proud to be the President of WKU when Jody Richards is properly recognized on our campus.”

Richards said he would be “forever grateful” to President Ransdell and the WKU Board of Regents for recognition.

“What an extraordinary, humbling and greatly appreciated recognition it is to have a WKU building named in my honor,” Richards said, “particularly one in which so many students’ lives are affected and enhanced.”

Richards’ connection to WKU is extensive. He began his career as a faculty member, teaching for seven years and serving as the adviser to the College Heights Herald and Talisman student publications. He remains an avid Hilltopper fan and a champion of all things WKU.

He has a long history of sponsoring impactful legislation, including the Kentucky Education Reform Act in 1990, the Kentucky Higher Education Reform Act in 1997 and the Kentucky Innovation Act in 2000, which, among other things, established the WKU Center for Research and Development. Rep. Richards was instrumental in securing funding to establish The Carol Martin Gatton Academy of Mathematics and Science in Kentucky at WKU in 2006 and sponsored the legislation to authorize The Gatton Academy in 2007.

“No one has been more instrumental in the improvements at WKU than Jody Richards,” fellow Warren County Rep. Jim DeCesare of Rockfield said. “When you think about WKU, you can't help but think about Jody. This is a well deserved recognition, especially because it’s in the building that houses the Journalism program where he began his career.”