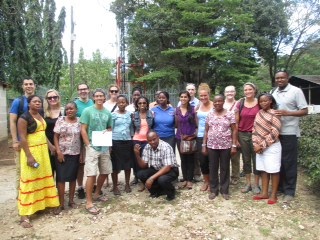 As a university with international reach, WKU has partnered with a variety of study abroad organizations to make it easier for students as well as faculty to extend their academic experiences beyond the U.S.

Dr. William Mkanta, an associate professor of healthcare administration in the department of public health, helps his students interact with international communities by leading study abroad programs with the Kentucky Institute for International Studies (KIIS).

Originally from Tanzania, Dr. Mkanta is the director of the KIIS Tanzania and KIIS Zanzibar programs. He works collaboratively with students while abroad to carry out public health related academic programs and research on a variety of topics concerning public health and healthcare administration.

Dr. Mkanta’s students often choose research topics that revolve around the management of the HIV/AIDS epidemic, one of the leading public health concerns in Africa. In 2014, he worked on a photo project with Trevor Davis, a WKU healthcare administration student from Louisville, KY. Their project was aimed at spreading awareness and understanding of the challenges and service needs of persons living with HIV/AIDS through photos taken by patients themselves.

Through this photo research, Davis and Mkanta were able to identify and document numerous challenges and needs experienced by the patients. They found that many Tanzanian HIV/AIDS patients lack access to nutrient rich foods that supplement antiretroviral medications.

Antiretroviral therapy, though it does not cure the disease, is the most common and effective treatment of HIV/AIDS symptoms. The medications are proven to help patients gain back necessary weight, given that their diet includes the right nutrients.

In 2015, Dr. Mkanta and Colleen Goodson, a healthcare administration student from Letcher, KY, also studied the impact of nutrition on the effectiveness of antiretroviral therapies in pediatric patients. The data they collected while abroad showed that antiretroviral therapies not only were more successful when nutritional requirements were met, but also patients who were unable to meet nutritional requirements suffered from more severe side effects of the medications.

One of the more recent studies took place during the summer of 2016. A WKU healthcare administration student, Maleah Boisture of Sacramento, KY, worked with Dr. Mkanta to survey a selected group of HIV caregivers over the age of 50. Their data showed that the older adult caregivers face more challenges than younger caregivers. Just over 50 percent of the survey sample felt adequately prepared to give their patients proper care. These results suggest that continued training and education for this group of caregivers is essential and should be designed specifically to address their challenges. Maleah attended the Global Health & Innovation Conference at Yale University April 22-23, 2017 as part of a FUSE grant that also funded her research in Tanzania.

The HIV/AIDS epidemic is perhaps one of the most relevant public health concerns in Tanzania. According to the UNAID Gap Report in 2016, 1.4 million Tanzanians were living with HIV and there were around 36,000 AIDs-related deaths.

This epidemic not only affects the health of individuals, it also impacts communities and nations in regions such as sub-Saharan Africa where the disease is concentrated. Many of the most affected nations including Tanzania suffer from stunted economic growth.

Because of this, the collaborative international research efforts of groups like those led by Dr. Mkanta and his students are not only insightful but also essential to spreading global awareness and understanding of the impact of disease.

Dr. Mkanta will lead a new group of 25 students to Tanzania this summer for courses in social work, occupational safety as well as in community health and social engagements through the global health service-learning practicum. The group will depart on June 7 for five weeks of academic and intercultural experiences in Africa.