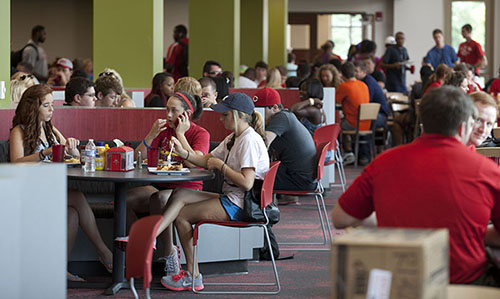 Improved dining options, catering choices and new and renovated facilities are hallmarks of a 20-year contract with Aramark for dining and catering services at WKU.

The contract, which begins July 1, builds on a 20-year relationship in which Aramark has provided services at WKU, according to Brian Kuster, Vice President for Student Affairs at WKU.

Kuster said both sides have signed a letter of intent and will continue to negotiate the final details.

“We expect this contract to be worth an estimated $20 million a year and will result in significant reinvestment in dining and catering services at WKU,” Kuster said.

Dr. Mike Reagle, Assistant Vice President for Student Affairs and Executive Director for Housing & Dining, said: “Aramark has proven themselves over the years to be a tremendous partner in the growth and development of the WKU campus so we are excited now to build on that foundation.”

The contract calls for a significant renovation of the Garrett Conference Center, including new food options, and spaces in the Downing Student Union and the Pearce-Ford Tower Food Court. It also calls for a new 24-hour food operation in Hilltopper Hall residence hall currently under construction.

WKU will receive an 8 percent commission on net food sales, which will be reinvested in the restaurant and catering program, Kuster said, by expanding and updating the current 21 dining venues.

“Garrett Conference Center, built in the 1950s, will undergo a $35 million renovation in the summer of 2018 to help meet the needs of the campus and the community,” he said. He said they are also surveying students as they plan dining option upgrades.

Students will also notice expanding meal plan options, including all access plans and a required $75 per semester declining balance plan for all full-time students not already on a meal plan.

On the catering side, WKU is seeking additional proposals for catering small events. Aramark will retain the first right of refusal, Kuster said.

“Partnerships with private corporations such as Aramark are essential if we are to provide the services and facilities desired by our campus community,” WKU President Gary A. Ransdell said. “We have enjoyed a tremendous relationship with Aramark for the past 20 years that has allowed us to develop a dining and catering program that is current, innovative and competitive with any other institution of higher education in both offerings and affordability.”