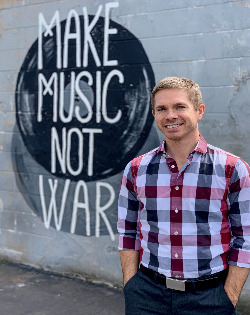 C. Allen Kennedy is Visiting Associate Director of Bands and Director of the Big Red Marching Band at Western Kentucky University.  His responsibilities include serving as the conductor of the spring Symphonic Band, coordinator of the athletic bands, and teaching undergraduate courses in music education.

Kennedy earned a Bachelor of Music Education from Western Kentucky University and a Master of Music in Conducting from Middle Tennessee State University.  He has had the honor of guest conducting the Corazón Verde Festival in Costa Rica, the Heart Friendship Honors Band in China, the Tennessee Governor’s School for the Arts Faculty chamber ensemble, and various middle and high school honors band clinics.  In 2016, he recorded Angel of Mercy with composer David Maslanka and the MTSU Wind Ensemble on the Naxos label.

Prior to his appointment at WKU, Kennedy was at MTSU for five years where his responsibilities included conducting the Wind Ensemble, Symphonic Band, Concert Band, Horn Ensemble, Marching Band of Blue, and teaching courses in music education.  He also taught middle/high school band in the Kentucky public school system for six years.  He has received additional study with notable conductors including Mallory Thompson, Jerry Junkin, Craig Kirchhoff, Steve Davis, and Linda Moorhouse.