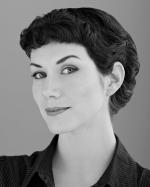 Liza Kelly, mezzo soprano, is Assistant Professor of Music at Western Kentucky University where she teaches voice and language diction.

(Her operatic and theatrical roles include Flora, La Traviata, Hattie in Kiss Me Kate, Nireno in Giulio Cesare, Dido in Dido and Aeneas, the Sorceress in Dido and Aeneas, Chairman Mao's Secretary in Nixon in China, the Widow in The Boor, Theresa in Casanova's Homecoming, Mary Warren in The Crucible, Ma Moss in Tenderland, Hattie in Kiss me Kate, Cousin Hebe in H. M. S. Pinafore, Mrs. Malloy in Hello, Dolly!, and many more.)

Dr. Kelly and her Husband, who works nationally and internationally as a professional opera singer, reside in Bowling Green.