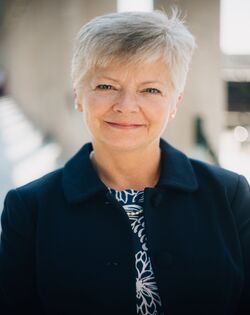 Dr. McGee coordinates the German curriculum at WKU and advises for the Certificate in German Studies. She has taught all levels of German in the U.S. and abroad, with an emphasis on 20th and 21st century Germany. She is a former Fulbright Scholar (Potsdam-Babelsberg 2002-2003) who has published in journals such as Film History: An International Journal, German Studies Review, Colloquia Germanica, and Foreign Language Annals as well as in film anthologies appearing in Britain and Germany.

She revised the German curriculum at WKU to foreground contemporary topics and applied uses of the language, in order to better prepare graduates to use languages in their future careers. Dr. McGee is a passionate proponent of study abroad, having studied three languages in four countries, and having led seven study abroad programs since coming to WKU. She has contributed to the development of a robust International Student Teaching Program in Germany that is designed for future teachers in all disciplines and levels.

Dr. McGee served as Head of Modern Languages for 11 years, from 2009 to 2020. In that time, she initiated creation of the Arabic and Chinese major/minor programs, added Russian and expanded Japanese offerings. She arranged professional development to support a better understanding of proficiency and assessment across all languages in the department. She used data-based approaches to improve recruitment and retention. Under her guidance, the department brought in more Fulbright Language Teaching Assistants, ALLEX TAs and Taiwan Interns, and supported several graduate assistantships. These efforts helped the department expand offerings in critical languages in particular.

Since 2018, she has served as Co-Principal Investigator of the Chinese Flagship at WKU. Additionally, she wrote grant proposals to expand Japanese at WKU (awarded, declined) and to provide professional development for teachers in Kentucky (awarded, directed). In addition, she has co-authored or contributed to STARTALK and Department of Education grant proposals that emanated from the department while she was at the helm.

Dr. McGee is a leader in the field of world language teaching. She served as President of the Kentucky Fulbright Association from 2014-2016 and was the convener of Head and Chairs of Modern Languages at the annual Kentucky World Languages Association Meeting for many years. From 2004-2006, she served as President of the Kentucky Chapter of the American Association of Teachers of German. She has contributed to more than one round of revision to Program Review for World Languages in Kentucky. Her path to leadership in the field began when she was chosen to join the TraiNDaF 2004 cohort (a project of AATG and the German government), intended to develop future leaders in the field.

She has served as a reviewer for language programs and departments, and continues to be a resource for programs and institutions as they manage growth and of change.