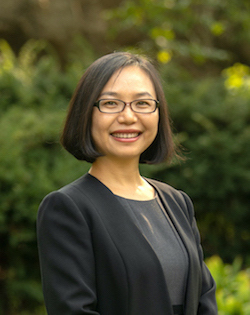 Dr. Ke Peng holds a doctorate in Chinese linguistics and second language acquisition from the University of Arizona. She did her Master’s degree in Foreign Language Education at Indiana University, Bloomington. Dr. Peng coordinates the Chinese major and minor program in the Department of Modern Languages. In addition to building a proficiency-based curriculum and helping students achieve the targeted learning outcomes with performance-oriented instruments, her ultimate mission is to serve students who are passionate about the Chinese language and culture, and support them to make massive and transformational changes in life through holistic learning and intercultural experiences.

As the advisor of the Chinese Club and the coordinator of the Chinese program, Dr. Peng aims to build a cross-functional high performance team to create a student-centered community through innovative collaborations with the instruction team, the student leaders in the Chinese Club and the native speakers of Chinese as language partners and teaching assistants. Dr. Peng offers modern Chinese language instruction at all levels, and occasionally offers courses in Second Language Acquisition and Teaching Methods of Foreign Languages to both undergraduate and graduate students.