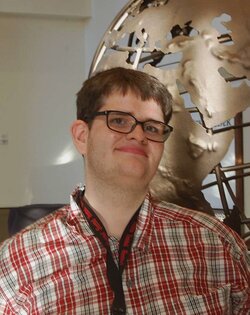 Cody Smith is a current student at WKU's Department of Modern Languages and is pursuing a B.A. in Spanish and Arabic with a concentration in teacher certification. In the future, he hopes to inspire students of the next generation to become lifelong learners of world languages and spread knowledge of language and culture. In addition to being a student of WKU Modern Languages, Smith is also involved on many levels such as being a student worker in the Modern Languages office, president of Spanish Club, vice president of Arabic Club, and a team member of the WKU QatarDebate Team. He is also a student of the Mahurin Honors College and has an interest in how people acquire foreign languages and methods of language teaching.

Although he came to WKU Modern Languages in Fall 2021 as a freshman, Smith has been involved with (and extremely passionate about) learning languages for nearly the last six years. In middle school, he studied Latin and taught himself French. In high school, he studied Spanish and took some Chinese, in addition to receiving a Virtual NSLI-Y Scholarship for Arabic. At the university, he is currently enrolled in Russian in addition to his major languages. His personal philosophy is that language learning is not only the learning of grammar, vocabulary, and culture, but is the key to unlock opportunities in the world around us.