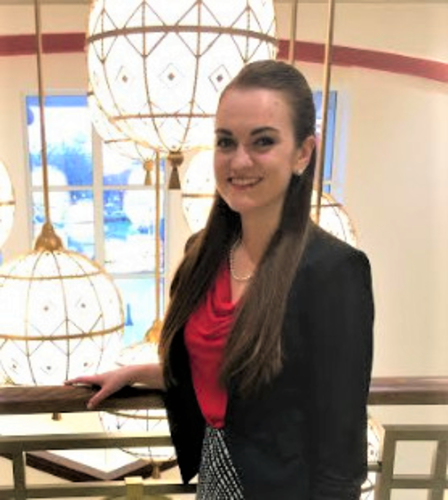 WKU Modern Language alumna Mollie Todd grew up in Eastern Kentucky, in the small town of Flemingsburg. The town was small, but Todd’s interests were vast, and she turned to books and magazines as an outlet to experience the world. “ Growing up in Eastern Kentucky, I had a really narrow sense of the rest of the world and what it could look like,” recalled Todd, “I read a lot of books and magazines as a child, like National Geographic, which frequently featured studies from anthropologists. I had no idea what kind of job I could get in the field, but I was so impressed by those articles, I wanted to learn more.” With her passion for anthropology firmly rooted in childhood study, Todd’s affinity for learning and appetite for experience would extend into adulthood. Todd enrolled in the Fall semester of 2013 as a Cultural Anthropology major.

A year later, in 2014, she expanded her interests to include Arabic. Todd’s interest in Arabic was initially a fluke. “I chose Arabic on a whim actually, because all of the Spanish classes were full,” said Todd, “I fell in love with the language and really enjoyed Dr. DiMeo as a professor, so I decided to become a double major.” Her love for Arabic language and culture would lead to many opportunities that she may not have been able to experience otherwise, such as studying abroad in Jordan for two summers. “The high point of undergrad for me was being awarded the Critical Language Scholarship to study Arabic in Jordan for the summer of 2016,” stated Todd, “Study abroad programs are extremely expensive, so I felt very blessed to be able to go overseas without having to pay for it.” While Todd had spent her childhood trying to experience the world through reading, she was able to go there herself by studying abroad.

Todd’s Arabic adventures continued even after her two summers in Jordan, as she went on to represent the U.S. with her WKU teammates in an international debate competition in Qatar. Native Arabic speakers were in one debate pool, with non-native speaking international students in the other. At the end of each debate, one of the teams offered a rebuttal. Todd, as a WKU representative, was in charge of the last rebuttal in every round. “The experience of being on the Arabic debate team was surreal and really challenging,” she stated, “This was an intimidating competition for a lot of reasons. For one, Arabic is not my native language and for two, we were only allowed to speak in Modern Standard Arabic, which is much more precise/difficult to speak than the dialects many of us had learned while studying abroad. Additionally, a lot of the teams we went up against had gone to Islamic schools and learned Arabic since a very young age, even though they weren’t technically native speakers. So as far as language capabilities, the WKU team was at a disadvantage.”

While the debate itself was rather nerve-racking, Todd learned a lot during the experience. She learned to think on her feet and communicate complex thoughts in a language she wasn’t entirely comfortable with, as well as how to speak in front of others, a fear that Todd had to overcome in order to participate. Her favorite thing about the competition was being able to interact with the different teams and learn about their home countries.  Todd and her teammates socialized with teams from South Africa, the Maldives, Malaysia, Pakistan, Australia, and many more. Todd and her team were also able to take a tour of Al Jazeera headquarters, Todd’s favorite news outlet, in Doha, Qatar. The trip was organized by the Modern Language Department’s Professor Guerwane.

The summers in Jordan and debating in Qatar were priceless experiences that Todd worked very hard to make possible. “It was really pretty difficult, because even in undergrad I was working multiple part time jobs and volunteering and trying to do school at the same time. I’ve always been very ambitious, loved learning and cherished the opportunity to go to college.”

Todd won “Student of the Year” in both Cultural Anthropology and Arabic, and graduated with honors as well.

While she was working hard to pursue her dual passions for anthropology and Arabic, Todd was also doing her best to give back to those in need. During her time at WKU, Todd was heavily involved in the Refugee Services Department of the Community Action of Southern Kentucky (CASOKY). While with CASOKY, Todd volunteered and later interned in case management. She helped process intake paperwork and living essentials such as food assistance, housing, and Medicaid. She also helped refugees fill out job applications and write resumes. CASOKY helps refugees begin new lives, and Todd was more than happy to be a part of that effort. “I’m very passionate about refugee issues,” she stated, “and was very eager to give back to the community in any way I could.” Todd also volunteered with the International Center, specifically English as a Second Language (ESL) classes. She helped with the ESL classes, participated in the family mentoring program and attended home visits, as well as helped kickstart the refugee greenhouse program.

“In general, I am so inspired by the work of Community Action (CASOKY) and the International Center. They’ve done a lot of great work for the refugee community and deserve the utmost support. I hope that the current administration will change and that the number of refugees being allowed into the country will increase, along with funding for refugee-related programs. An important takeaway I gained from volunteering in the refugee community, is the depth of suffering and tragedy that people can withstand and still be able to bounce back and live happy lives.”

After working with the International Center and volunteering in ESL classrooms, Todd began to recognize how difficult it can be to teach a classroom with varying cultural backgrounds, differing native languages, and varying levels of education. “I was inspired to sort of pay homage to the work that ESL teachers in the Bowling Green and Owensboro communities were doing,” Todd stated, “and to give [other teachers] advice [on teaching ESL students], through gaining perspectives from their peers.” This inspiration led to Todd’s honors thesis, a project on the challenges that immigrants and refugees face when learning English. The thesis is entitled “Forms, Functions, and Accessibility of English as a Second Language Classes in South-Central Kentucky.” For her thesis, Todd conducted interviews with ESL teachers in Bowling Green and Owensboro. The purpose of the interviews was to learn about the teachers’ experiences teaching English to refugees specifically, and what challenges they may have faced. “In the end, the thesis served as a series of best practices and testimonies of these ESL teachers: what had worked for them and what hadn’t.”

After graduating from WKU, Todd went on to pursue her Masters of Arts degree in U.S. Foreign Policy and National Security, from American University’s School of International Service in Washington, D.C. Todd worked as hard as she could, as she always had: this time, she was working full-time and attending school full-time, as well as completing her work as a research assistant for her graduate program. Things were made even more difficult by living in a rather expensive city. Todd recommends, “make sure that a master’s degree is something you are passionate about and believe you can actually get a job with. These degrees are too expensive to undertake if you aren’t sure about it.”

While graduate school was difficult, Todd also excelled. As part of her graduate student assistantship research, she translated Arabic texts for a professor who was writing a book on the ideological origins of Hezbollah (a Shia Islamist political party and militant group). She was also government relations intern at the Arab American Institute, a non-profit institute in Washington, D.C. that works with the Arab American community to educate Arab Americans about their legal rights and encourage them to vote. Later, Todd was a due-diligence researcher at a private firm where she worked with clients interested in investing in companies or individuals in the Middle East.

Today, Todd’s work differs greatly from the work she completed as an undergrad and graduate student.  Todd is now an analyst working in Washington, D.C. for the US Government Accountability Office, a federal non-partisan agency that provides auditing, evaluation, and investigative services for Congress. Her focus is on education, workforce, and income security issues as they relate to federal programs. Since graduating with her MA, Todd still does her best to remain involved in her passions. “I love learning languages and have since taken more Arabic classes here in Washington. In the spring I’m planning on taking either a Farsi or Urdu class, because I really find those languages interesting.”

Todd also loves to cook, garden, and attend festivals and shows around the city.

For more information on study abroad, visit the Study Abroad and Global Learning office in HCIC 1028. Interested in the Arabic language, culture, or debate team? Contact Dr. DiMeo at david.dimeo@wku.edu! To take action with the Community Action of Southern Kentucky, visit their website.

Interested in applying for a Critical Languages Scholarship like the one Mollie had? Read about CLS and the languages for which it is offered on their website. To get support in submitting a timely and highly competitive application, and to learn about other similar opportunities, contact the Office of Scholar Development at WKU.