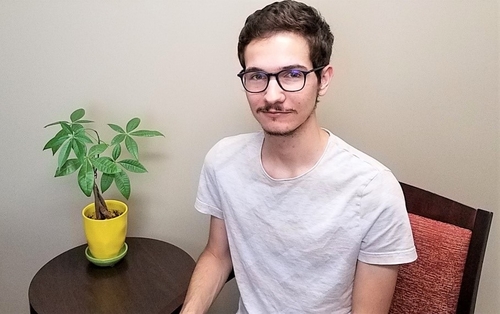 French TA Hadrien Plaisse is a familiar face around the WKU Modern Languages Department, assisting Dr. Karin Egloff in teaching French to WKU students. Hadrien wants to teach English in his home country of France and is about to enter his last year of school. He had always wanted to teach and considered teaching science before realizing a need for competent English teachers in France. “I want to teach English as a second language in France, and I want my students to love learning English. The truth is that many English teachers in France are rather old fashioned and just teach from the textbook.” Hadrien is looking forward to using his experience at WKU to teach English in a more engaging fashion. “The technique of teaching through storytelling is something I’d like to implement while teaching back home,” stated Hadrien.

For Hadrien, English has opened many doors, and he wants to extend those opportunities to his students. “Knowing English, you can go to almost any country and make friends, find something you need, and be able to enjoy your stay there.” Hadrien is also planning on using his experience at WKU to share U.S. culture with his French students.

To be able to teach English in France, Hadrien must pass the National Exam for teachers, typically taken after the first year of the master’s program. Hadrien will be taking it after his second year of the program, as he chose to come to WKU to experience the culture and language first-hand. The National Exam is very difficult to pass, and he is hoping his first-hand experience with English and the teaching style he has learned while at WKU will give him an edge when taking the exam.

When asked about Western Kentucky University, Hadrien smiled. “The campus is beautiful,” he began, and went on to discuss how much he is enjoying the friendships he has made while working at the university. Hadrien returns to France in less than a year and will miss his new friends and colleagues.

When Hadrien isn’t studying for the National Exam, or creating lesson plans for his French students, he enjoys cooking. Cooking is more than just a hobby for Hadrien, having learned the art primarily from his grandmother. “In France, we had an hour lunch break...I could walk to my grandmother’s house and with her.” When asked about what dishes he most likes to cook, Hadrien admitted to preferring sweets.

The Modern Languages Department will miss Hadrian when he returns to France in May 2020 and wishes him luck on his upcoming exam. Hadrien enjoyed his time studying abroad, something also offered by the Modern Languages Department. For students interested in studying abroad, the department offers many programs including travel to France, China, Japan, and many other countries. “Just do it,” Hadrien stated when asked about studying abroad, “you get to experience cultures and different lifestyles. It’s very much worth it.”

Interested in learning French with Hadrien? Hadrien will be teaching FREN 102, Elementary French II, in the spring 2020 semester. Sign up while spots are still open!

Interested in being a Fulbright Language Teaching Assistant like Hadrien? You can apply to teach or assist teaching English in another country. Learn more about Fulbright at Fulbright Online. To get support in submitting a timely and highly competitive application, and to learn about other similar opportunities, contact the Office of Scholar Development at WKU