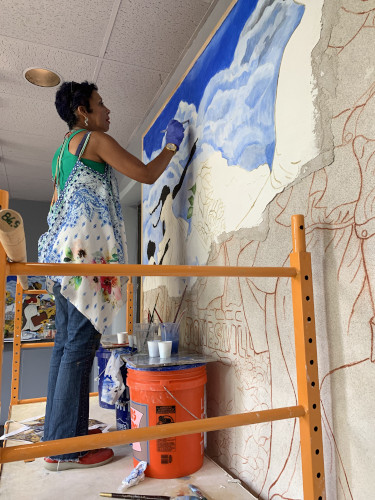 At the Kentucky Museum, a new artwork is coming to life.

Local artist Alice Gatewood Waddell and WKU professor and artist Mike Nichols are collaborating on a buon fresco mural commemorating Bowling Green’s Jonesville community. Supported by a grant from the E. Rhodes and Leona B. Carpenter Foundation, the mural also provides internships for three WKU students – Aisha Salifu, Cecilia Morris, and Riley O’Loane – who are working alongside Waddell and Nichols to make the vision come to life.

The subject of the mural, Jonesville, was established by freed slaves shortly after the Civil War. It became a thriving African American neighborhood, but was demolished to expand WKU in the 1960s. Today, the land is the location of Diddle Arena, Smith Stadium, Downing Student Union, and Bates Runner Hall.

“Being given the opportunity to create the image for the fresco mural has allowed me to share the story about people who once lived in a thriving community and the unfortunate transition that occurred in many Black neighborhoods like Jonesville.” shared artist Alice Gatewood Waddell, “ I hope this project will serve as a small tribute of remembrance for those who knew of its existence and an enlightening story to others who are unaware of how swiftly generations of families can be demolished without fair compensation or respect.”

The technique used – fresco painting – is notable for its permanence. Used through history to enhance architecture, fresco fuses paint and stone together and has been used since Ancient Roman times. Using these time-honored methods, professor Mike Nichols teaches WKU students about fresco in class and through applied learning projects such as the Museum’s mural. At the Kentucky Museum, the fresco is being built using five layers of lime plaster, with a week of curing between each of the first three layers. The fourth and fifth layers of plaster will be applied on the same day, in sections referred to as “giorante,” which are small enough to be painted before the plaster dries. Painting only on wet plaster ensures the pigment will be permanently locked into the wall. Giorante work progresses in stages, with small sections being finished each day, eventually forming a completed mural.

“The result of this collaborative project,” stated Museum Director Brent Bjorkman, “is a space that truly reflects our vision as a welcoming gathering place, where we increasingly champion inclusivity as a virtue of the museum’s place for applied learning at WKU. The fresco stands as a testament of our commitment to engaging with and representing all Southcentral Kentuckians, and providing a place for our campus and community to have meaningful conversations about our past, present, and future.”