In line with WKU’s COVID -19 policy, the Kentucky Museum is closed to the public until further notice.  Museum staff can respond to phone calls and emails. 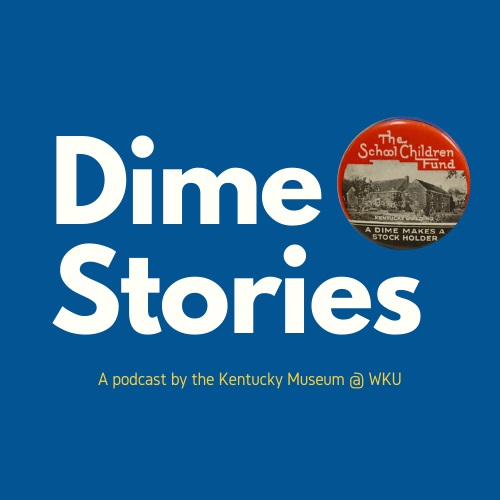 The Kentucky Museum has released its first podcast series, Dime Stories, which explores the unique art, history and culture of South Central Kentucky. Produced in thematic seasons, the podcast features interviews with WKU faculty, guest scholars, and community members who reflect on the season's topic and provide insights into the Museum's collections and programs.

Dime Stories was named for both its length - with each episode around 10 minutes long - and as an homage to the Kentucky Building's founding. Construction of the 40,000 square foot structure started on August 4, 1931, and the exterior was completed that fall. However, the Great Depression made it nearly impossible to raise funds to complete the interior. To solve this problem, the College Heights Foundation distributed small coin banks throughout the state, and children donated by collecting dimes in the tins. In the end, over 4,000 Kentuckians donated to the Kentucky Building, which was completed in September 1939.

The first season of Dime Stories begins with this story, and then focuses on the recent Journey to the Vote programs held at WKU that celebrate the 150th anniversary of the 15th Amendment and the 100th anniversary of the 19th Amendment. Building on events from the 2019-20 year, the season's episodes explore the role of Black women in politics, with guest speakers including Dr. Saundra Ardrey (WKU, Poltiical Science) and Dr. Anne Onyekwulege (WKU, Sociology), as well as stories about Georgia Davis Powers, the first woman and first African American elected to the Kentucky Senate, and Pearl Carter Pace, who served as Cumberland County Sheriff and, later, Chairman of the War Claims Commission under President Dwight D. Eisenhower.

"Podcasts are a great tool for helping disseminate community stories and culture," stated Tiffany Isselhardt, the Kentucky Museum's Development and Marketing Manager. "As a podcast producer, I've seen not only the impact that listening to stories can have, but also the impact that production can have on the researchers, writers, and scholars whose work is highlighted. It's a great tool to present research that our WKU faculty and students are conducting, while connecting that research to relevant discussions in our community. We are thrilled to be able to use podcasting to extend the themes of our collections and the work of our colleagues and guest curators to the larger community."

Later seasons of the podcast will explore the Kentucky Museum's collaboration with the Kentucky Forge Council for a virtual Hammer-In, insights into the exhibition Gazing Deeply: The Art & Science of Mammoth Cave, African American artists represented in the Museum's collection, and the upcoming Whitework: Women Stitching Identity exhibition.

Dime Stories is available on many podcast streaming services, including Anchor.fm and Spotify, and will soon be available on Apple Podcasts and Google Podcasts, among others. The first season began July 28 and runs through September 8, with new episodes published each Tuesday.

Kentucky Museum 2021 Side by Side Virtual Exhibit is Now Open

2021 Side by Side Virtual Exhibit @ Kentucky Museum

Foundation to support the creation and installation of a “buon fresco” mural in collaboration with artists Mike Nichols, a Professor in the WKU Department of Art & Design, and Alice Gatewood-Waddell, a local artist and WKU alumna who received a Bache

The Kentucky Museum is pleased to welcome Jackson Medel as the Luce Term Assistant Curator.

Today, the Kentucky Museum has launched a SpiritFunder in support of a collection of 19th and early 20th century fashions produced by Bowling Green's own fashionista, Mrs. A. H. Taylor, and her factory of over 300 women.

Foundation to support the creation and installation of a “buon fresco” mural in collaboration with artists Mike Nichols, a Professor in the WKU Department of Art & Design, and Alice Gatewood-Waddell, a local artist and WKU alumna who received a Bache