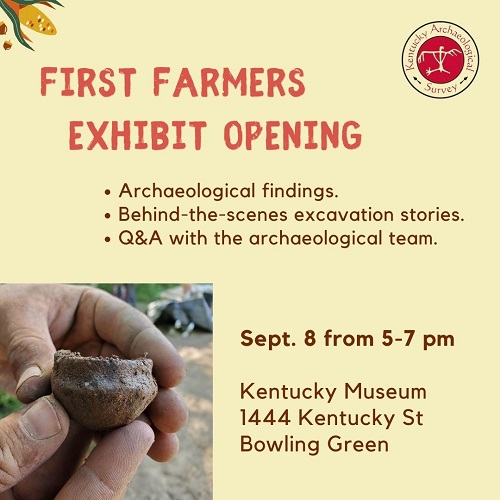 This Thursday at 5 p.m., the Kentucky Museum will premiere First Farmers of the Barren River Valley, an exhibition showcasing recent excavations of a Native American village in Warren County. The exhibit's opening event will be from 5 to 7 p.m. and include a behind-the-scenes look at excavations, with a guest talk by the Kentucky Archaeological Survey team that surveyed and excavated the site in 2019, 2020, and 2021. Following the talk, visitors will be provided the first look at First Farmers, which displays and interprets findings related to technology, settlement, foodways, society/politics, and economics/trade that reveal life in a farming village circa 1350 CE.

"This exhibit provides museum visitors with a glimpse of what life may have been like along the Barren River 700 years ago," stated Dr. David Pollack, Director of the Kentucky Archaeological Survey, who led the excavation team.

That time period is the late Mississippian era - so named because the majority of peoples lived along what is now the Mississippi River and its tributaries. These communities were linked to larger town-and-mound centers where political and religious authority was held by the chief, war leaders, and shamans. These people were connected by the centralized political and religious authority of the chief as well as extensive trade networks. Raw materials and finished products moved through these networks across wide ares. Symbols and ceramic styles show that they shared rituals and religious beliefs. Because of their similar ways of life, archaeologists refer to all these peoples as Mississippians. By the mid-to-late 1300s CE, when First Farmers residents established their village along the Green River, Mississippian culture had existed for 400 years.

"We are thrilled to have partnered with the Kentucky Archaeological Survey to showcase their recent excavations," stated Tiffany Isselhardt, Exhibit Curator at the Kentucky Museum. "Our mission as a teaching museum is foremost to showcase the research being done by WKU faculty and students, which expands our knowledge of Kentucky's history and cultures. First Farmers demonstrates that Indigenous peoples settled here - they called this land 'home' - and we need to recognize and honor that as part of our history. We are truly grateful for all the hard work that students, faculty, archaeologists, and artists put into helping tell this story."

About the Kentucky Museum

The Kentucky Museum is an integral part of WKU’s campus and the South-Central Kentucky community. The Museum actively supports the academic and cultural goals of WKU while providing quality educational experiences and opportunities to engage with Kentucky’s heritage and our relevance in a global society. Thanks to the implementation of free admission, the Museum has grown exponentially over the past three years, from 14,000 visitors in 2019 to over 30,000 in 2021, representing a broad swath of Kentucky residents and tourists.

The Kentucky Museum will upgrade their art print collection storage with a $10,000 grant from the LeRoy Neiman and Janet Byrne Neiman Foundation.