Eagles in Ireland: A Conversation with Emilie Gill

"We cannot stay home all our lives, we must present ourselves to the world and look upon it as an adventure." - Beatrix Potter

In December 2017, the Mahurin Honors College hosted a holiday card design contest. The winning design became the official holiday greeting card and was emailed to all students, faculty, staff, donors and alumni of the College. The winner of the contest was Emilie Gill (’18) from Allensville, Ky.

“When I saw the ad [to design a holiday card] I just immediately thought about a white squirrel with a mug of hot chocolate. I'm obsessed with the white squirrels on campus — they're kind of a second mascot for WKU — and I like to imagine that when they run off to their lairs at night that's what the inside of their trees looks like.”

Gill chose WKU partly through familiarity. Growing up, she participated in a lot of Super Saturday events on campus doing crafts and similar projects. She originally planned on going to school for illustration but decided to go to WKU because of the university’s strong art department, how willing the teachers seemed to work with her despite not offering her desired major, the offered scholarships and because of the wealth of study abroad options available. Instead of majoring in illustration, she chose to double major in art history and studio art with a minor in geography.

“My art focus is illustration and a lot of cultural geography is the theme that you see in movement, region, place, human interaction, and that's very similar to designing illustrations. So it's fun to go out and travel and see the places you're going to draw and learn about the people you’re going to draw.”

Gill has already done a fair bit of traveling. She took HON 251: Citizen and Self in Washington D.C., spent a semester in New Zealand and last summer spent five weeks in Austria, followed by a month in Ireland. In New Zealand, she had a chance to meet and work with artists who had been involved with “The Lord of the Rings,” doing a character design workshop with professionals and getting to play with some of New Zealand’s famous rare birds. But Gill’s favorite personal experience while abroad took place in Ireland:

“We were on a boat tour and it was all of us and these two British people who were the last two people they had room for and I ended up sitting next to them. They haven’t had eagles [in Ireland] in forever, they had just reintroduced them and no one had seen one in the park before and this eagle flew out and got this fish next to us. I managed to get a picture of the eagle and the British people asked for it and we ended up talking. We got into a big conversation about picture books and now we’re really good friends and pen-pals and we send each other stuff and they’ve asked me to visit them.”

Gill is the recipient of multiple scholarships, including the Jarve Endowment scholarship for study abroad students. Additionally, Gill serves as a Study Abroad and Global Learning student ambassador. She is a 2012 alumnus of Governor's School for the Arts and volunteer for their local events (Artshops) in Bowling Green. Gill is a member of the Society of Children's Book Writers and Illustrators and a self-described “devoted book fair connoisseur.” She has been playing piano for 13 years and plays part-time for restaurants and student recitals.

When asked about her favorite experience with the Honors College, Gill will tell you it is her current Capstone Experience/Thesis (CE/T) project. She is researching, writing and illustrating a picture book for children.

“I’m really into the children’s book industry and I’ve been studying why picture books have been associated mainly with children because they weren’t always like that. I’m going to make a book promoting the whimsy of childhood but also make the content contain the dignity for a more mature reader. I feel like grown-ups should read picture books.”

Her favorite part of the project is not the book itself, however, but the interaction she has with her advisor and mentors.

“The interaction I’ve had with my advisor and my mentors has been really nice. They don’t know anything about illustration but they’re like, ‘We can work with you, we can do this.’ It’s less my actual project but how kind my advisors have been with helping me.”

Gill chose to come to WKU out of a love for the instructors and a desire to travel, and her story is punctuated by both. From the kindness of her advisors on her CE/T to the friendship of strangers met while abroad, she has lived up to the expectations of two of her favorite authors, Beatrix Potter and C.S. Lewis.

"Friendship is unnecessary, like philosophy, like art... it has no survival value; rather it is one of those things that give value to survival." – C.S. Lewis 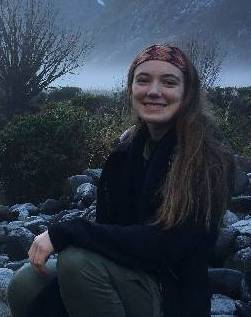