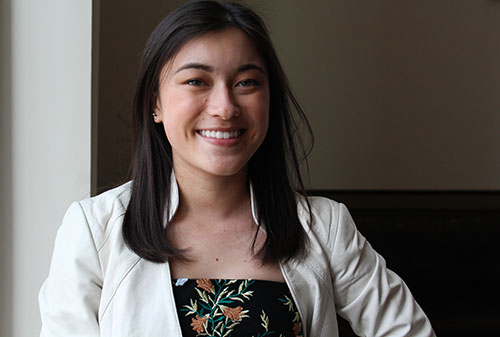 WKU student Lauren Pedersen of Barbourville was selected as a 2018 Barry M. Goldwater Scholar, the premier award for undergraduates pursuing careers in science, mathematics or engineering.

Pedersen, the daughter of Anne and Paul Pedersen, studies biology and chemistry at WKU and is a 2016 graduate of The Carol Martin Gatton Academy of Mathematics and Science in Kentucky. She is the only student from Kentucky to receive a Goldwater scholarship this year.

“I hope that I can use this as motivation to pursue a career in research and grow as a scientist,” Pedersen said. “I feel truly blessed for all of the support I have received from my family, professors and advisors and know that without their guidance this would not have been possible.”

Pedersen has conducted extensive research at WKU. Over the past six semesters, she has researched the effects of aging on sensory perception with Dr. Farley Norman, University Distinguished Professor in the Department of Psychological Sciences. By identifying the perceptual changes that accompany aging, she hopes to predict the modifications that should be made to slow or reverse age-related declines.

“In the three years that I've worked with Lauren, I have been impressed by her enthusiasm and dedication,” Dr. Norman said. Because of this attitude, he said, she has “become co-author of five articles published in prestigious scientific journals to date, which is very impressive for an undergraduate student.”

Dr. Kevin Williams, professor of chemistry at WKU, noted: “Lauren’s undergraduate research productivity is extraordinary, and she is an outstanding student in the classroom as well. She provides an excellent example of the high level of productivity and achievement that our undergraduates can obtain.”

Established by the U.S. Congress in 1986 to recognize the former senator from Arizona, the Goldwater Scholarship program identifies and honors university sophomores and juniors who excel in science, technology, engineering, mathematics research. To support future career researchers, winners receive $7,500 annually to apply toward undergraduate tuition, room and board, fees and books. This year 1,280 students were nominated for a Goldwater scholarship. Each school can nominate just four students. Of those nominees, 211 were named Goldwater Scholars and 281 were identified as Honorable Mentions.

Since 2007, 35 WKU students have been recognized in the Goldwater Scholarship competition. Pedersen sought guidance from Dr. Audra Jennings, director of the Office of Scholar Development, in preparing her Goldwater scholarship application.