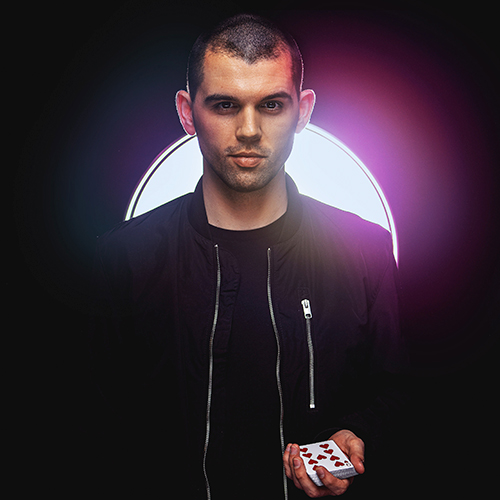 One fateful night, Brice Harney’s grandfather came home and performed a card trick he learned earlier at a poker game. Brice (MHC ‘15) was simply amazed. He begged his grandfather to show him the trick and went on to perform it for all of his friends. At 10 years old, Brice realized his dream- to become a professional magician and perform around the world.

Any scholar in the Mahurin Honors College (MHC) can recall the first time they were challenged to identify their “big dream.” For some it is to travel the world, others want to be a lawyer or artist, but no matter the dream, the MHC is prepared to enthusiastically aid scholars just like Brice as they ascend towards excellence.

During his time on the Hill, Brice was a member of the campus ministry Campus Crusade for Christ (CRU) and performed several shows for Phi Sigma Pi. He also studied abroad his senior year in Leicestershire, England where he served as a student teacher. During a visit to London, Brice got to meet up with a magician that he had previously only known over the internet.

“My freshman year, I saw a magic show in Van Meter Auditorium. I remember it was March 2012, and it was an amazing show. They had a second show the next night, and I went to that as well. I got connected to the guy who ran that show and said, ‘This is what I want to do for the rest of my life, how do I do it?’ He told me to stay in school and contact him when I graduated.”

WKU cultivated a deeper love for magic in Brice’s heart. In fact, a magic video he filmed in the hallowed halls of Minton went viral on Youtube: https://www.youtube.com/watch?v=MXYokniPwHA. With over 46,000 views, Brice’s skills became legendary on campus. He would stand outside of the Downing Student Union and perform tricks all the while improving and expanding his talents.

“I had a meeting with Dr. Cobane and told him I wanted to be a professional magician. Through my four years in the MHC, Dr. C. did whatever he could to not just encourage me to pursue that dream, but open doors that I wouldn't have had access to otherwise. In fact, he got me a meeting with WKU’s President at that time, Dr. Gary Ransdell.  During that meeting, we talked about what it would look like if I performed magic for a halftime show or for the basketball team. There were other opportunities that Dr. Cobane helped me pursue while I was a current scholar,  but the truth is he is still helping me reach my ultimate goal of coming back and performing in Van Meter.”

Brice also cites the community of scholars as a driving force that encouraged him “to pursue the highest degree of excellence in everything that I do.”

As soon as Brice received his diploma, he contacted the magician he mentioned earlier, secured a spot, and toured with him for four years. He performed on a cruise to Mexico for a few months. He also performed in the arctic circle at a very small community in Rankin Inlet, which Brice described as exactly like the planet Hoth from Star Wars. One of his most memorable performances from that trip was in a maximum security prison. Once Brice returned to the United States, he joined a top secret community of magicians and improved his practice and skills, until he became a professional magician and mentalist. His shows became very successful but like many, Brice took a hit in 2020.

Brice and magicians around the world worked with each other to develop online magic shows. “The magic world has always been on the forefront of technology and innovation.  When COVID happened, magicians wanted to keep performing and they became some of the first shows you could see virtually. They got together in these forums and brainstormed ways to put on the best possible virtual show, so magic shows looked better than all other virtual offerings. With magic, it's interactive and the audience is engaged with the whole thing.” In some cases, distant magic is even more amazing. Brice even made something appear on someone’s doorstep hundreds of miles away during a virtual show.

Brice’s online success allowed him to perform with huge companies like Meta. As it became safer, those connections became in person, and Brice got the opportunity to perform at the Meta Data Center in Texas. Brice is thankful to be moving off of virtual shows because he “tries to create a high energy, conert-like vibe at my shows which isn't really possible online.”

“I think people like magic because it’s something that they don’t understand. When you do not understand something it's entertaining and intriguing. Other forms of entertainment such as comedy, we laugh everyday. There are so many forms of entertainment that we are used to experiencing, but when you experience magic, it's an unordinary treat. I want people to leave my shows with an emotional connection. I like to share the story of my grandfather showing me the card trick and developing my love for magic even though he never got to see my dream come to fruition.”

Brice wants all current MHC scholars to know their dreams are not crazy or dumb. Often, he was met with doubt or concern when he told people he wanted to be a professional magician, but with perseverance and dedication, Brice achieved his goal. “You can do the same. Do not let anyone belittle your big dream. Be dedicated and work hard.”

If you want to see more of Brice’s acts, go to his website at https://www.bricemagic.com/.