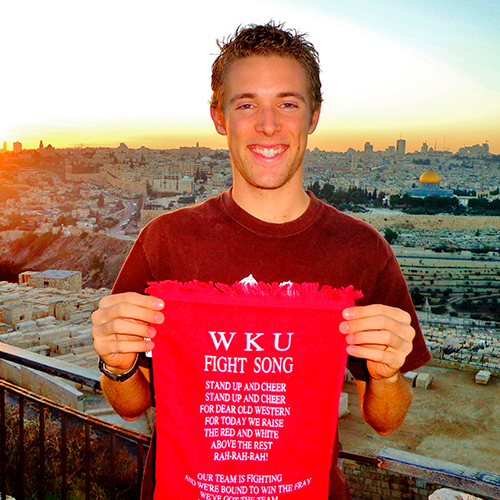 The Mahurin Honors College seeks to nurture scholars in a way that makes them successful no matter where they choose to go. Some stay close to the Hill and the beloved Bowling Green area, while others answer the call of adventure and travel the world. Nate Hovee (MHC’ 13) is one such scholar who answered that call.

During his time in the MHC, Nate double majored in Broadcasting with a concentration on TV and film production and Theater. Outside the classroom, he worked on News Channel 12, performed in multiple shows, served as a study abroad ambassador, and worked with masters program orientation for several summers and Habitat for Humanity.

As an aspiring videographer and motivated by a desire to view the world and engage with people with all sorts of different stories, Nate took advantage of the diverse study abroad options and traveled for school multiple times.

“I was able to truly customize my education by doing these different programs and talking with people about these projects that I wanted to do,” said Nate. “I had the opportunity to create my own experience for what I was interested in and what I wanted to do in the future. There were very few times where I received a “no,” but when that happened, there were other options to pursue.”

Nate first studied abroad in Harlaxton during the fall semester of his sophomore year.

“Dr. Cobane really encouraged me to take advantage of that opportunity early on and talked to me multiple times on campus.”

Nate’s next trip was to New Zealand, specifically the Victoria University of Wellington. He further developed his skills at a short broadcasting program in France and his photography capabilities through a programming Israel.

Finally, Nate extended his undergrad experience to complete one full year in Turkey.

“Dr Cobane, the MHC, and a number of people around campus helped me financially and offered a lot of support to allow me to do a fifth year of university, even though I didn’t need it for my majors. It was an opportunity to bring my education together in Istanbul.”

Nate happened to be in Turkey during a major uprising and used his skills to document the riots around him. Much of his footage was used on CNN and by local Bowling Green media outlets. While this wasn’t easy, and at times, a little scary, this unique experience allowed Nate to act fast and overcome difficulties.

So how did the MHC and the diverse study abroad experiences offered by WKU aid an aspiring videographer?

“The Mahurin Honors College gave a hands-on experience with the classes I was taking and what I was interested in when it came to cinematography and acting overseas. I got to rehumanize the world for myself. I was able to learn about and capture new perspectives and rather than judge, you just listen. In terms of storytelling, it's important to just go in with an open mind about whatever you're covering in whatever country with whatever politics or religion are in place and just go and soak it all up, and then be able to tell a story from where you are.”

Upon graduating, Nate got a job on a flight crew. While this experience continued to let Nate travel, network and save money, he also offered his skills to the airline and got the opportunity to film safety videos, public speaking events, and help at conferences.

After resigning in 2018, he went to the Philippines and chose to focus on YouTube. Nate’s channel boasts 41.5K followers and features Clark, the city where he lives in the northern Philippines. From researching and writing to filming and editing, Nate is in control of every aspect of his videos. He also had thousands of photographs from his travels and was able to sell them to companies that used them for magazines, articles, mugs, puzzles, etc.

Nate’s work continues to be a reflection of the grandeur of the world around him. He still spends his free time traveling and filming projects where he, “is now in a place where I feel confident, comfortable, and pretty much ready to go for anywhere I end up in the world.”

You are a movie star, Nate, and we are so proud of you!