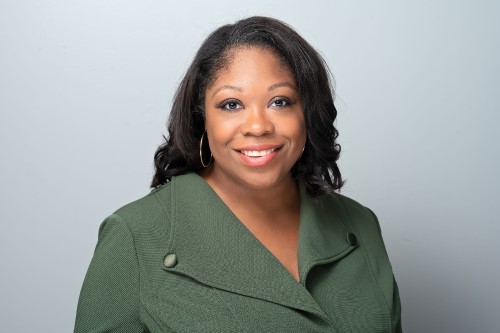 As the saying goes: ”home is where the heart is,” and many Mahurin Honors College (MHC) scholars such as Ameerah Palacios (MHC ‘05) have set their heart atop the great hill of WKU. Ameerah began climbing the hill back in 2001 and has never ceased to give her time and efforts to aiding others on their ‘Ascent Towards Excellence’.

As a Mass Communications major and Asian Studies and Broadcasting double minor scholar,  Ameerah was very involved with reporting on the Bowling Green community.

“I saw Bowling Green as a prism to a community that had all these really wonderful entrepreneurs and people who were building up their community for the better,” stated Ameerah. “This type of work certainly came with its challenges. Advocating as, sometimes, the only black journalist in the newsroom, it could get tough when I felt I had to speak out on things that were probably a little risky or controversial. But I knew I was doing the right thing, and this award, to me, meant that my work was valued in the Bowling Green community and at WKU.”

In fact, in 2007, Ameerah was honored with the President’s Award for Diversity for her reporting and work in the Bowling Green community, as she had used her passion for reporting to build bridges with diverse aspects of the BG community that she saw sometimes received unfair perceptions seemingly built on misunderstandings.

Despite being rather busy during her WKU days, Ameerah studied abroad twice! Her programs to Japan and the United Kingdom formed her mindset to consider ideas in a more global context. This attitude has been critical in her media and public relations career.

“My foundation at WKU gave me permission to explore not only just the bounds of my academic freedom, but literally the world. I was able to study abroad in Japan, and, thanks to the MHC, I was also able to do a winter in London. Coming out of Western with more of a global mindset gave me something that I use even to this day: a sense of openness and cultural competency.”

With her bachelor’s degree in her hand, Ameerah could hardly guess the beautiful and ever evolving career that lay before her. Following WKU, Ameerah started a television job right out of the gate as the host of a local ABC affiliate’s public affairs show called, “New Horizons.”

“I began to think about my background, coming from an entrepreneurial family, and I developed a strong desire to be the Bloomberg on the Bell person.” Bloomberg TV featured live reports from New York Stock Exchange during local newscasts. Although Ameerah never realized that dream, she did make it to NYC to interview at one point and that experience taught her a great deal about chasing after great dreams.

“I started researching the background of those folks, and I realized many had finance or MBA degrees and had worked for newspapers. I knew many of the folks at the Bowling Green Daily News, and there was an opening at the local paper. I proved to them that, as they would say, ‘the TV girl can write!’ I ended up working for both the Bowling Green Daily News and for WKCT at the same time. I absolutely loved it!” Ameerah was the 2008 SBA Kentucky Small Business Journalist of the Year.

Her study abroad experience converged with her career path once again when a friend that she met abroad during her program in Japan suggested that she move to New York to complete a graduate degree.  Shortly thereafter, she received her Master’s degree in Business Administration (MBA) from The College of Saint Rose.

“(Following completion of my MBA) I ended up going right back into news and became a producer at an NBC station there, but returned to business reporting for The Daily Gazette.Later I left New York and moved to St. Louis to work for nonprofits only to end up coming back to the Northeast after getting married.”

Her time back in the Northeast will forever be treasured by Ameerah because she was able to use her skills to support her township after the devastation caused by Hurricane Sandy. After some time, she headed back down south and worked at Metro Nashville Public Schools doing communications and marketing for nearly 170 schools. She was later recognized as one of the top school public relations professionals in the country with NSPRA’s 35 under 35 award.

“Finally, I got the opportunity to come back to Louisville as Director of Marketing and Communications for GLI, the Chamber of Commerce. As I was settling in, a mentor encouraged me to look into HDR, a public infrastructure consulting firm. I looked into them and discovered they're a global employee owned company with 120 locations and about 12,000 people work at the firm based out of Omaha, Nebraska. I was recruited to join their strategic communications Practice and two years in, now I serve as their regional communications lead for Kentucky, Tennessee, and Arkansas.”

So how did her work as an MHC Scholar make a lasting impact on her media and advocacy-focused career?

“WKU gave me the tools and skills to parlay whatever I was doing into my next step. When I was at WKU, I had many discussions about convergence. Even then, 20 years or so ago, my professor would predict how our TVs were going to become our computers. I realized that I needed to be well-rounded. So, I came out of WKU with this whole, broad range of skills from television to radio to journalism, all while having the ability to understand and analyze how media is impacting us in society.”

In addition to receiving the tools she needs to follow the up-and-coming trends, Ameerah’s CE/T experience in the MHC taught her practical skills about communication and research.

“I recently did some focus groups for a water project, and I remembered when I was an honors scholar doing research studies for my thesis. I recalled a student survey that I conducted where I gave an incentive to everyone in DSU to take my survey with cookies. I got a really nice sample for my survey, and I still find myself practicing that process of just being a scholar who not only talks about issues, but is actively involved and poses hypotheses to put together a study. My work with communications and community engagement research started right there at WKU!”

Although Ameerah utilizes her global mindset to make an impact around the world, she also strives to “bloom where I am planted” and is currently working to improve Louisville.

“One of the reasons why I came back to Louisville is because I realize that it is an emerging city, and it needs leaders that will take the time to help it become the best version of itself for years to come. It is a good time to be part of what I've seen to this day, to be part of the city’s movement and evolution, and to help shape Louisville for the better.”

Ameerah’s love for WKU is evident throughout her career, but she knows giving back is important.  Ameerah currently serves as one of 30 on the WKU Alumni Association National Board of Directors. The Board of Directors, among multiple priorities, promote the mission of the WKU Alumni Association and serve as a voice for WKU alumni worldwide. She has even introduced many of WKU’s students to job and internship opportunities through her company, HDR.

“I feel like WKU gave me so much, so I'm very invested in giving back to it and watering its roots to ensure it remains healthy for the next generation. So for me, serving on this alumni board is about connecting Hilltoppers to immersive career experiences that will help them thrive.”

From the very beginning, we have been in awe of Ameerah’s passion and drive and are honored that she calls the MHC at WKU “home.”