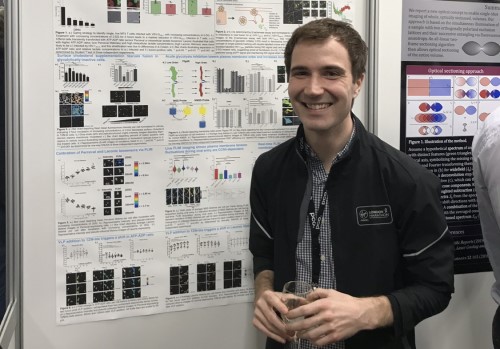 While Mahurin Honors College (MHC) scholars study a broad scope of subjects, some such as Chad Coomer (MHC ‘14) have found their home in the STEM field. As a double major in Chemistry and Biology, Chad flourished with the multiple resources WKU has to offer to advance his career.

Looking at Chad’s schedule, one must wonder if he ever slept. He performed violin with the orchestra, was an active member of Alpha Epsilon Delta (a pre-med professional society), served his peers through tutoring chemistry, aided in growing the Office of Scholar Development (OSD), and was an advocate for LGBTQ+ scholars in STEM. In addition, he studied abroad and performed with the orchestra in China. Performing a mixture of Eastern and Western masterpieces, Chad and the orchestra traveled to various cities in China enabling each scholar to “have a cross-cultural exchange with music.”

Chad credits much of his career opportunities to the Office of Scholar Development (OSD). “When I got started with OSD, they asked me: ‘What are your dreams?’ I, of course, listed nearly 20 things I wanted to do, and they said ‘sure, we can make this work.’ They took my wild and ambitious dreams seriously. Most people tell young undergrads ‘Sure, sport, that's great. I’m sure you will change the world.’ But OSD really listened attentively and validated the things that I thought were important, and even guided me through making a plan.”

For his Capstone Experience/Thesis (CE/T), Chad worked with Dr. Rodney King in the Genome Discovery and Exploration course where he isolated and characterized novel bacteria and viruses. “From that moment, I was sold at doing bench work, laboratory bench work, and I wondered how I could keep doing more of it?”

Equipped with several hands-on research experiences and a thorough education, Chad was prepared to progress into the first stage of his career. As graduation quickly approached, he had some difficult decisions to make. He received a Fulbright Scholarship, an offer to do an M.D. Ph.D. at the University of Kentucky, and an invitation to pursue a Ph.D. through the Oxford Cambridge program. Chad chose the Fulbright Program in England and pursued his Masters degree in infection immunity. Following his Fulbright, Chad went on to earn his Ph.D. at the University of Oxford, where he split time between Oxford and the National Institutes of Health. It was during his time in England that Chad met and married the love of his life.

STEM is a very taxing and demanding field, and Chad states it is easy to get caught up in merely focusing on the next paper, project, or promotion, but it is truly the people he serves that fuel his passion. “While I may be constantly questioning ‘how do I advance myself academically and shoot right’, when I take the 10,000 foot view, it's really the people I serve and work alongside that matter most. Where I come from in medicine and science, if you're not doing it for the person in the bed, why are you doing it in the first place?”

Being so accomplished people often admirably ask Chad how he managed it all.

“There's nothing special about me innately. I just found something that I was passionate about. I surrounded myself with the people that really motivated and inspired me. The MHC specifically offers a lot of one-on-one time with people that have connections and can afford the time to listen to you and kind of guide you on your own path that you have. And if you can’t find something that challenges and inspires you, find someone. Overall, I just did what I was told. When Dr. King told me to go to OSD, I went to OSD. When Dr. Jennings said I needed to write out a personal statement, I did. Just do what you are told and keep showing up.”

Chad’s love for WKU is abundant. In fact, he was invited back to campus as one of the very first MHC Young Alumni Speakers. Chad promoted his belief that “anyone at WKU has the tools and the resources to get where they want to go. I think the only limitations that people have are the ones they put on themselves.”

We admire Chad’s dedication and drive and are beyond proud of all he continues to accomplish.