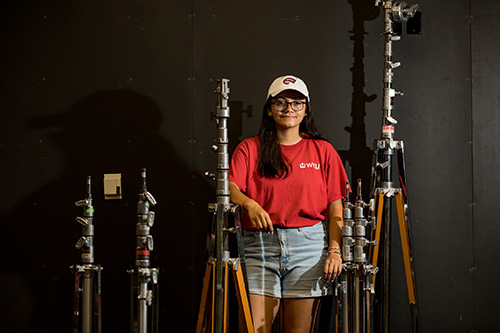 Before coming to WKU from Mayfield, Kentucky, Veronica Crystal Vallejo-Garcia was a quiet, shy kid in her small town. Over her two and half years on the Hill, she blossomed into a confident student who is involved in her film program, the Big Red Marching Band, and HOLAS.

Vallejo-Garcia has been interested in film since she made Barbie doll movies with her friends in fourth grade. During a welcoming WKU campus tour her senior year of high school, Vallejo-Garcia saw the plentiful opportunities in the Bachelor of Arts film program, like hands-on courses and study abroad opportunities. She instantly knew that WKU would be the best place for her to be challenged and cultivate her passions.

During her freshman year, Vallejo-Garcia had the opportunity to work on four Bachelor of Fine Arts (BFA) movie sets, which was her first hands-on experience on a professional film set. Commonly, she worked 10 to 12 hour days and felt she grew in her studies due to the challenges that arose.

“I learned communication on those BFA sets,” Vallejo-Garcia said. “You have to constantly communicate with the director and other people about how things should be done. I also learned the importance of working together. You have to make sure everyone is on the same page with everything.”

Vallejo-Garcia is also a part of Hilltopper Organization of Latin American Students (HOLAS). HOLAS is a registered student organization that provides support to Latinx students and promotes Latin American culture.

“They help around campus and teach people all about Latin cultures,” Vallejo-Garcia said. “When I walked into [the first meeting], it felt like I was truly home because I felt so welcomed in the presence of the President and Vice President. They actually want you to come out of your shell and be more proactive and productive. That was something I wasn’t used to. Talking to people scared me, so when they told me ‘don't be afraid’ and ‘don't be ashamed,’ that's what I did. Being in HOLAS has really helped me.”

To kick off Hispanic Heritage Month, which runs from September 15th to October 15th, HOLAS held an “All Around The World' event on September 15th in the Preston Center. There were raffles, games, free food, face painting, and music as WKU students, staff, and faculty learned about a diverse range of Latin American cultures.

“We made trifolds for places like Cuba, Puerto Rico, Guatemala, and Mexico, and set them up on different tables,” Vallejo-Garcia said. “I worked on Cuba, and we had food out from all those different cultures. It's important because people learned about these different cultures that they had no idea what they were. It's important to keep their history and culture alive. All they knew was American culture before.”

Vallejo-Garcia believes HOLAS is important to the WKU community.

“It's important to learn not only what you know about America, but to learn about other places too because they're also just as important,” Vallejo-Garcia said. We help students who, like me, are a part of the culture, but don’t know much about it. You get the opportunity to learn about it yourself.”

One of Vallejo-Garcia’s favorite parts about her experience at WKU are the football games, where she plays baritone for the Big Red Marching Band.

“I marched last week in front of 25,000 people, and I thought that was so incredible to be involved in that,” Vallejo-Garcia said. “[I love] being at an event where everybody is really passionate about something, about football. Coming from a high school and the small town of Mayfield, it wasn't as lively.”

Above all, Vallejo-Garcia enjoys WKU because of its diversity and inclusion.

“My favorite professor so far was probably Dr. Fabián Álvarez,” she said. “He’s also Mexican, so getting to know him really made me feel more comfortable. Knowing that I have people to relate to, like Fabián or the people in HOLAS, feels good. In high school, we had diversity. When I came here, it was the exact same thing, and that was something that I really liked getting to see here on campus.”

Vallejo-Garcia hopes to become a cinematographer after her time at WKU. Being a fan of romance and horror films, she has many ideas rolling around in her head about the creative content she wants to create. In whatever she creates, she knows she wants diverse representation.

Vallejo-Garcia feels like she will be ready to dive head-first into the film world due to her studies and experiences at WKU.

“I’ve changed by getting to actually make friends, getting to talk to people and getting more involved in things,” Vallejo-Garcia said. “I've definitely learned more communication skills, because I'm not that quiet girl anymore.”