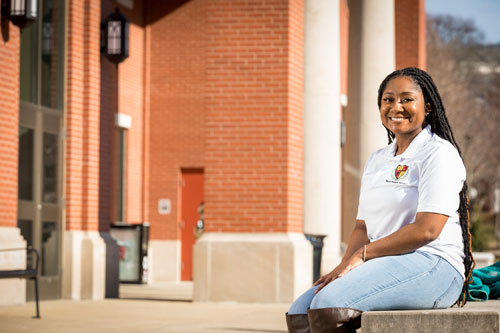 Kiria Braden, a senior from Nashville who is earning a degree in marketing, a concentration in social media and a certificate in data analytics, said she’s come a long way since her first semester on The Hill.

The now president of the Black Student Alliance (BSA) and marketing intern in the Intercultural Student Engagement Center (ISEC) said she went from rarely leaving her residence hall her first semester of college to running for WKU homecoming queen three years later.

“WKU really helped me come out of my shell. At the beginning of my freshman year, I was afraid to really go out, but once I started networking and meeting new people, it made my college experience so much better,” Braden said. “Running for homecoming queen last semester was one of the best experiences I’ve had at WKU.”

Braden started getting more involved on campus her second semester by participating in the Miss Black Western pageant.

Braden’s leadership positions with student organizations multiplied during her sophomore and junior years. She joined the BSA her sophomore year after learning that the organization serves as a safe space for minority students and their allies, promotes academic achievement, cultivates dynamic leadership, and strives to eliminate social barriers. The BSA also focuses on mental health in the Black community.

“BSA really made an impact on me. Seeing people who look like me having a good time together gave me positive vibes, and I really enjoyed that. Soon after attending a meeting, I applied to help with their social media.”

Braden started off running social media, but a year later she became the BSA president. She’s now in her second term as president, and she focuses on building leadership skills, overseeing the executive board, making decisions, and delegating and sharing responsibilities with the board.

“I want to make sure everyone on the executive board can gain experience from BSA so they can apply what they’re learning to the real world,” Braden said. “Sometimes new leaders can be afraid of talking in front of people. I want the e-board to be comfortable with being uncomfortable. They are going to be the next leaders on campus.”

Lamario Moore, program coordinator for ISEC and BSA advisor, said that Braden is thriving as the organization’s president and doing the rewarding work of building leadership skills in others.

“Her passion is contagious. Over the past year and a half, she has elevated the Black Student Alliance to new levels through her creativity and direction. She is one of few students that I have met that know the way and do not mind showing their peers the way,” Moore said.

Braden said the BSA activity that impacted her the most was the Black Lives Matter Candlelight Vigil last September. She was worried that no one would show up because of the pandemic, but she recalls that it was well attended and the most powerful event during her time at WKU.

“We had a candlelight vigil where we set up tables and had pictures and bios of nearly 60 people nationwide who have died in the hands of the police force. Sometimes that news doesn’t make mainstream media,” Braden said. “WKU Police Officer Tim Gray spoke about being a black man in the police force, and students had the opportunity to share their stories and experiences. Students from different backgrounds came up to share their stories. Some stood up just to say that they were there to listen and to learn from us because they’ll never fully understand what the Black community is going through. It was just really good to have all that love in one place at one time.”

Braden’s newest adventure began this semester, serving as a marketing intern for ISEC. Braden’s connection to ISEC is not new. Although she was not formally part of ISEC until now, she spent a lot of time making friends with ISEC academy students, connecting with ISEC staff and utilizing the study hall space over the last few years.

The internship allows her to use the skills she is developing in her upper-level marketing courses. Some of her work at ISEC overlaps with BSA, such as the marketing for Black History Month. In her role at ISEC, she’s also responsible for designing graphics, assisting with ISEC social media, implementing marketing plans and social media strategies, and examining social and website analytics to help ISEC obtain reach and engagement online.

“I am excited to be a part of Black History Month and all the behind-the-scenes work of promoting it this year,” Braden said. “The Black Student Alliance organized an event called Emotionally Scarred, it’s a mental health event. I am also really looking forward to two other Black History Month events, Maskerade and the Black History Month Soul Food Luncheon later this month.”

Braden graduates this fall and plans to pursue a career where she can combine her love of social media marketing, finance, and entrepreneurship. She also plans to pour more energy into her small business, KB Essentials, which creates and sells wigs and hair extensions.