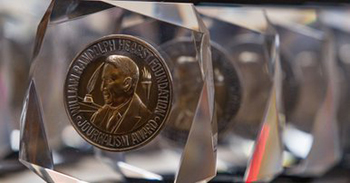 WKU students Harrison Hill, a senior from Louisville, and Gabriel Scarlett, a sophomore from Maumee, Ohio, are among six finalists who will compete in the Hearst Journalism Awards National Photojournalism Championship. Earlier this spring, Alyse Young, a senior from Redmond, Washington, qualified for the Hearst National Multimedia Championship. The championships will be held May 29-June 2 in San Francisco.

In March, WKU won the Hearst Intercollegiate Photojournalism Competition for the 23rd time in the past 28 years.

Often called “The Pulitzers of college journalism,” the Hearst Journalism Awards Program, now in its 57th year, includes five writing, one radio, two television, four multimedia and two photojournalism competitions offering up to $500,000 in scholarships, matching grants and stipends; 106 member universities of the Association of Schools of Journalism and Mass Communication with accredited undergraduate journalism programs are eligible to participate in the Hearst competitions. Schools accumulating the most points earned by their students in each category are designated the winners of the Intercollegiate Competitions. The final Intercollegiate winners will be announced later this month.

WKU’s School of Journalism & Broadcasting, which placed third overall in the 2015-16 Hearst program, has finished in the top five nationally in the Hearst overall competition for the past seven years, in the top eight for 23 straight years and won the overall national championship in 2000, 2001 and 2005.