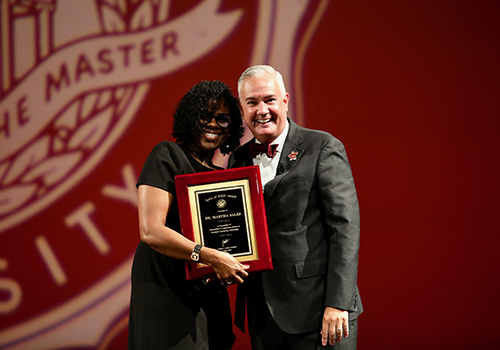 “As the selection committee noted,” President Timothy C. Caboni said, “it’s not that she’s been here for 24 years or that she’s earned all of her degrees from WKU. It’s that she is part of the fabric that makes WKU special and that she has consistently made a difference in our community.”

President Caboni presented the award as part of the 2022 Faculty and Staff Convocation at Van Meter Auditorium.

“I am extremely honored and thankful,” Dr. Sales said. “I feel so blessed. The Hill keeps blessing me.”

A native of Franklin, Dr. Sales came to WKU as a first-generation and low-income student, which fueled her desire to serve students.

“While helping students make the climb at WKU, Martha emphasizes the potential for lifelong transformation through a college degree,” President Caboni said. “With four degrees earned at WKU, one more than a triple Topper, she serves as an example and a role model for our students.”

Dr. Sales received her Bachelor of Science in Social Work with a minor in African American Studies; a Master of Arts in Counseling in Marriage and Family; an Educational Specialist Degree in Student Affairs; and a Women’s Studies Graduate Certificate - as well as a doctorate in Educational Leadership.

“The foundation of her work lies in connecting with students and building relationships that strengthen over time,” President Caboni said.

As executive director of TRIO Programs, Dr. Sales and her team have received millions of dollars in federal grants to support low-income, first-generation students and those with disabilities in their pursuit of a college degree.

She was also a key figure in establishing the Cynthia and George Nichols III Intercultural Student Engagement Center, which promotes a culturally inclusive campus environment and provides services to foster academic success.

In March 2021, the Dr. Martha J. Sales ISEC Award was presented for the first time. The scholarship, established through a generous gift by Cynthia Nichols, is awarded to an ISEC student who plans to attend The Graduate School at WKU.

Dr. Sales also was instrumental in tornado relief efforts and worked with students who were affected to ensure they had the necessary resources like housing, meals, books, internet and more.

She met her husband, Shawn, while they were WKU students. They have two children, Seth and Kiah.

Beyond her tremendous and neverending work on the Hill, Martha is an active member of the community.

Growing needs in the health care industry prompted WKU to establish a separate college for health and human services 20 years ago. WKU’s Amy Bingham takes a look at the growth of CHHS in this week’s View from the Hill.