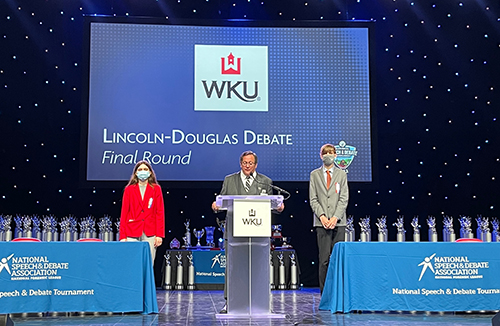 The tournament featured the top 6,000 high school student speech and debate competitors from the organization’s roster of 143,000 eligible members around the United States as well as nine other countries.

The National Speech and Debate Association offered over 20 public speaking, interpretation and debate events. This year, WKU sponsored Humorous Interpretation and Lincoln-Douglas Debate. As sponsors of the competition, WKU representatives spent the week judging, interacting with coaches, and recruiting students to join the national championship Forensics program at WKU.

“WKU is a longtime supporter of the National Speech and Debate Association, but this was our first year back to in-person competition since the beginning of the pandemic,” Director of Forensics Ganer Newman said. “We were thrilled at the opportunity to sponsor the exceptional competition in Lincoln-Douglas Debate this year. While we are longtime supporters of Humorous Interpretation, it was awe inspiring to witness the first Black Muslim woman in a hijab win the national championship in the event.”

WKU’s Director of Debate Chad Meadows said, “Sponsoring Lincoln-Douglas debate at the NSDA was a first for the program. It was important to emphasize on this stage the scope of our team as one of the country’s leaders in speech and debate. The tournament was a huge success, and it was incredible to see the hosts from Louisville, Kentucky, showcasing the best this state has to offer. It was exciting to associate Western Kentucky University with the largest high school academic conference in the country.”