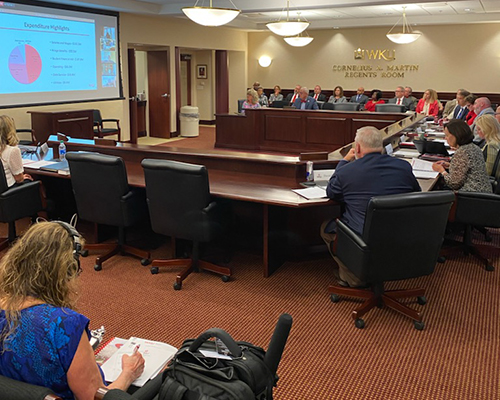 Western Kentucky University’s Board of Regents today approved a $383.4 million budget for fiscal year 2023, an increase of nearly $8 million compared to the prior year’s budget. The budget includes a 2% salary pool to address cost of living increases, pay gaps and inversion, remedy compression, and reward performance.

The fiscal year 2023 budget marks the university’s full transition to a Resource Allocation, Management and Planning (RAMP) budget model. RAMP is an approach that uses the principles of responsibility-centered management (RCM) and is a financial management philosophy that supports decentralized decision-making and rewards the performance of campus units. WKU President Timothy C. Caboni noted that the transition to a RAMP model provides significant benefits to the institution. “I’m proud of the transparency it creates for the entire campus. This is a tool for growth that serves us well going forward,” he said.

Tuition and fee revenue will comprise the largest share (46%) of the fiscal year 2023 revenue budget, $176.5 million. The Regents approved a 1.19% increase to the undergraduate resident tuition rate for the coming fiscal year. Undergraduate resident students will pay $5,556 per semester for tuition, an increase of $60 compared to the 2022 fiscal year. “We are certainly a tuition dependent institution,” said Susan Howarth, WKU’s Executive Vice President for Strategy, Operations, and Finance.

State appropriations account for 22%, or $85.7 million, of the new budget, an increase of 9% from the previous fiscal year. The state appropriation includes $67.6 million in base funding, $7.8 million in performance funding, approximately $5 million for The Gatton Academy, $3.6 million to balance increases in Kentucky Employee Retirement System premiums, and $1.75 million for the Kentucky Mesonet at WKU.

The Regents also approved several construction projects on campus. The budget passed by the 2022 Kentucky General Assembly included $74.4 million to construct a new 144,000-square-foot building for the Gordon Ford College of Business. The new building will be located on the site formerly occupied by Tate Page Hall, which was razed during the summer of 2021.

The Board also approved up to $30 million to preserve, renovate, or renew Henry Hardin Cherry Hall, which was originally constructed in 1937. The first phase is to conduct a feasibility study for master planning purposes, which will assist in developing project phase budgets and schedules. The multi-phase, multi-year project will address major infrastructure upgrades and will involve extensive interior and exterior work. “I’m really excited about the opportunity to transform this space and reimagine it in a way that will enhance faculty, staff and student engagement,” said President Caboni.

The Board also selected officers for 2022-2023. Phillip Bale of Glasgow will again serve as Chair, W. Currie Milliken of Bowling Green as Vice Chair, and Jan West of Louisville as Secretary.

The Board of Regents will next meet on August 11, 2022, for its annual Board Retreat, followed by the third quarterly meeting of the year on August 12.