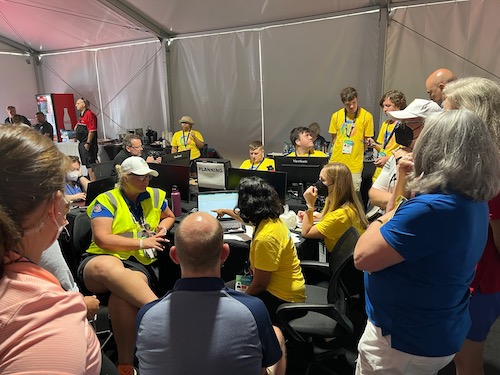 The opportunity to provide weather and emergency management services for the two-week event in Orlando, Florida, is the latest example of the applied learning experiences offered by White Squirrel Weather and the Emergency Management Disaster Science program.

WKU’s Disaster Science Operations Center expects to open its on-campus facility this fall, but the program has been developing its model at WKU football games, campus events and a NASCAR race last year in Nashville.

“This is definitely our biggest ticket to date and has taken nearly a year of planning,” Dr. Durkee said.

“Essentially I was approached over a year ago by a former colleague at General Motors who asked if I would be interested in volunteering to do safety work for the USA Games in Orlando,” said Dr. David Oliver, Director of Environmental Health & Safety and WKU’s Emergency Manager.

The conversation turned to summer heat and lightning issues and that started a dialogue about the services WKU could provide to support the USA Games.

“It evolved from maybe one or two of us volunteering to go down there to let’s make this an educational opportunity for students,” Dr. Oliver said.

For nearly a year, the WKU group met regularly with Special Olympics USA Games representatives to develop the hazard mitigation plan with the work divided into three phases.

“It meant a lot that this big organization turned to WKU to get this job done,” Dr. Durkee said. “What we teach in our program and what we do at the university escalated to this event.”

The USA Games are held every four years and require an immense amount of planning, he said. As part of the preparation, Dr. Durkee and a handful of students traveled to Orlando earlier this year to scout locations and determine setup needs.

“They chose WKU’s White Squirrel Weather and Emergency Management Disaster Science program to support the events. That’s a great opportunity for WKU with regard to that level of outreach,” Dr. Durkee said.