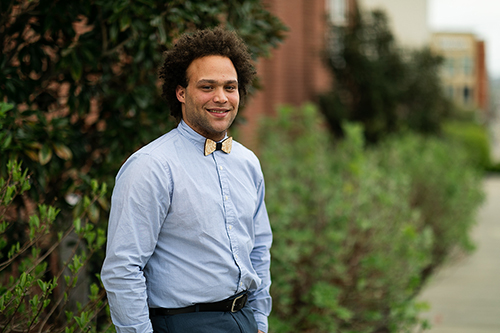 Antoine is a first-generation, non-traditional college student, a community leader, a devoted father of nine alongside his beloved husband, and, in a few short days, a college graduate.

Antoine has always been driven by his desire to create a positive impact in his community. Before attending WKU, he was already making social changes in his city by serving on local boards - such as the Imagination Library of Daviess County, the Owensboro-Daviess County Regional Airport, and the School-Based Decision Making Council for his local high school. Still, he felt that he needed to pursue a degree that would equip him with the knowledge and skills to have a more significant impact on his community. Therefore, he began his journey toward a degree in Sociology.

That decision marked the beginning of an extremely arduous two years. During that time, he has diligently worked toward a bachelor’s degree in Sociology with a concentration in Inequality and Social Change with a double minor in Organizational Leadership and Social Work and a master’s degree in Organizational Leadership. During his time on the Hill, Antoine joined the WKU chapter of the National Society of Leadership & Success and was recently inducted into the Alpha Kappa Delta Sociology Honor Society.

Despite his impressive effort, Antoine’s journey did not come without obstacles. Shortly after the start of the spring semester, the Smith-Rouse family faced the unimaginable loss of a child. Antoine considered withdrawing from classes altogether. However, with support from his professors and his family, he knew he had to keep going.

Thankfully, Antoine’s unyielding determination will soon be rewarded. As of August, he will have completed an associate, bachelor’s, and master’s degree in just two years and two months. After graduation, he is excited to take a family vacation and completely unplug. “No emails, no phone calls, and no Blackboard!”

When asked about his future career plans, Antoine joked that he gets that question a lot, right behind "Are all of those children yours?". While he’s not sure what his plans are just yet, he is still determined to make an impact, “Ultimately, what I want to do is change the world for the better. I am not 100% sure how I will accomplish that but please know I will leave my footprints on the sand of time,” shared Antoine.

For information about earning a degree in Sociology, visit https://www.wku.edu/sociology-criminology/

For information about earning a master’s degree in Organizational Leadership, visit https://www.wku.edu/leadership/graduate/masters.php