WKU to recognize 3,713 graduates during Commencement May 5 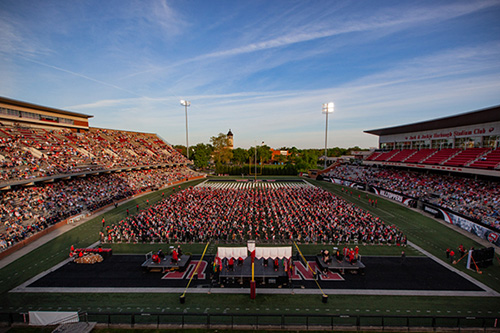 Note: Commencement exercises on May 5 will be held rain or shine, so graduates and guests should check weather forecasts and plan accordingly. Umbrellas and ponchos will be allowed in Houchens Industries-L.T. Smith Stadium. If severe weather is in the area, WKU will communicate delay information via the Commencement Website, emergency alert text messaging, email and WKU social media.

The ceremony also will honor 1,186 fall 2021 graduates whose recognition ceremonies were disrupted by December tornadoes -- 56 associate, 839 bachelor’s, 153 master’s, one specialist and 18 doctoral degrees, and 78 undergraduate certificates and 41 graduate certificates.

Commencement will begin at 6:30 p.m. with Topper Walk along the Avenue of Champions. The ceremony will begin once students have been seated on Feix Field.  During the ceremony, each college will acknowledge its graduates, and President Timothy C. Caboni will present the graduates to the Board of Regents for the conferral of degrees. (More: Commencement program)

The ceremony will include remarks from President Caboni; recognition of honor graduates and award winners -- Zena Pare of Alvaton (fall 2021) and Nicholas Barth of Alvaton (spring 2022) as the Ogden Foundation Scholars (top undergraduate award) and Ahmet Kaan Aydin of Istanbul, Turkey, as the John D. Minton Award recipient (top graduate award); and the commissioning of WKU ROTC cadets.

The ceremony will be broadcast by WKU PBS and will be streamed on WKU’s YouTube and Facebook pages.

The Commencement celebration will conclude with The Big Red Bash on the South Lawn, featuring the Music City Sound, a celebratory toast, food vendors and fireworks.

On May 6 at Diddle Arena, WKU’s five academic colleges will host recognition ceremonies to celebrate the accomplishments of their graduates who will walk the line and shake hands with President Caboni.

WKU is expecting heavy traffic throughout the day. To accommodate traffic flow for graduates and guests, WKU Parking & Transportation is providing parking recommendations for each ceremony, including shuttle service to Diddle Arena, at https://www.wku.edu/commencement/directions.php as well as live updates at https://www.wku.edu/eventparking. More: Event parking information; #KnowParking video; parking map

The Gatton Academy of Mathematics and Science will recognize 77 students from 37 counties in the Class of 2022, its 15th graduating class. The ceremony will begin at 2 p.m. May 7 at Van Meter Hall. Speakers will include Bruce Kessler, Claus Ernst and Uta Ziegler.