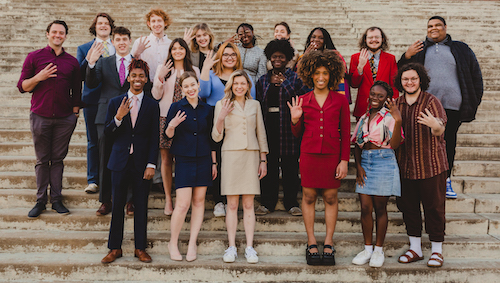 The Asynchronous Speech Championship (ASC) is the first to utilize video submissions rather than live performances to award a national championship.

WKU also took eight of the top 10 in Individual Sweepstakes, an award which acknowledges the points students accumulate across all their events. Senior Reese Johnson of Burnsville, Minnesota, was awarded the individual sweepstakes championship.

Director of Forensics Ganer Newman said: “This championship is a reflection of our students’ profound ability to adapt their public speaking gifts to new communication contexts and meet the demands of our changing world. They worked diligently with their coaches all season to develop powerful and inspiring messages, and challenged themselves to produce dynamic videos in order to engage a national audience. It’s awesome to see their efforts pay off in such an exceptional way at the Asynchronous Speech Championship!”

The team will now prepare for its final competition, the National Forensics Association National Championship hosted by Illinois State University.

Results from the Asynchronous Speech Championship are as follows: