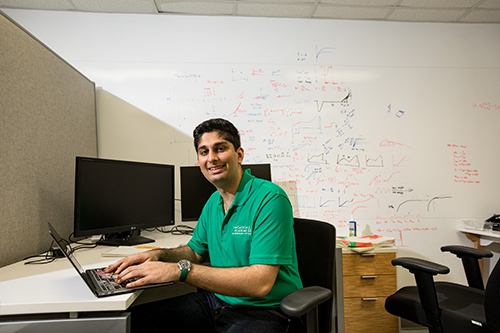 “I chose Gatton because of the many opportunities and experiences it could provide such as the research I am doing now,” said Sahil Krishnani, a student in the Gatton Academy of Mathematics & Science -- a nationally ranked high school located on Western Kentucky University’s campus.

Those experiences already include three research projects in his nearly two years at the academy.

Their project sets out to detect water pollution using drones and specifically aerial autonomous technology. Krishnani explains, “By doing this we are able to identify 85% of water pollution at a 90+% success rate without touching the water. This not only helps keep our bodies of water safe for us but also for the living things in the environment as well."

"As I had previously done drone research, my team and I looked to expand our previous project into something a little more applicable and focused so we looked at something that could help our community. One thing that we saw is that water pollution is an issue that is very close to home with the Ohio River, Barren River Lake, and Tug Fork being affected by it. With our project, we are able to identify the pollution effectively and alert authorities immediately which causes less environmental damage and keeps the waters safe for everybody.”

Krishnani’s prior research projects also created a strong foundation for this work.

“I have also completed two other projects which were ‘Developing Autonomous Drone Hardware and Software Using Python/Swift and Rpi” and The Best Laid Plans of Drones in Flight: Drone Trajectory Planning and Object Avoidance’.”

Krishnani explores his research interest within WKU’s Center for Energy Systems, where he is one of three Gatton students working as student research assistants. The CES’ mission is to provide a multidisciplinary, inviting, and engaging environment in which students develop skills through the successful delivery of industrial projects. With successful projects, the CES will advance scientific knowledge and cultivate technological developments for industrial sponsors.

“I have taken part in research at WKU Center for Energy Systems, which has allowed me to find my passion and given the opportunity to present in a lot of places as well -- one of which is going to be the International Science and Engineering Fair for High School Students in May. Without the opportunities through WKU and Gatton in particular, I think that I would be a completely different person, but now I feel as if I am ready to tackle the challenges I am going to face head-on and most importantly with a smile on my face,” Krishnani said.

After he graduates, Krishnani plans to start his own company aimed at helping people through robotics and improving quality of life in creative ways.

To learn more about the Gatton Academy, visit www.wku.edu/academy.

To learn more about the Center for Energy Systems, visit www.wku.edu/ces.