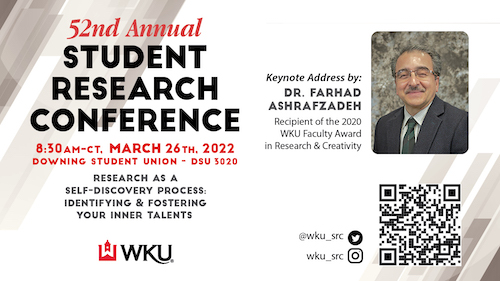 The conference will feature a keynote address by Dr. Farhad Ashrafzadeh, professor of electrical engineering, the Greulich Chair of Energy Systems and the founding director of the Center for Energy Systems at WKU.

Dr. Ashrafzadeh will present Research as a Self-Discovery Process: Identifying and Fostering Your Inner Talents at 8:30 a.m. at Downing Student Union, room 3020.

The conference schedule features student presentations throughout the day in the Downing Student Union. Registration for all conference participants and judges begins at 8 a.m. Presentations start at 9:30 a.m. and conclude at 4:45 p.m. All presentations are free and open to the public.