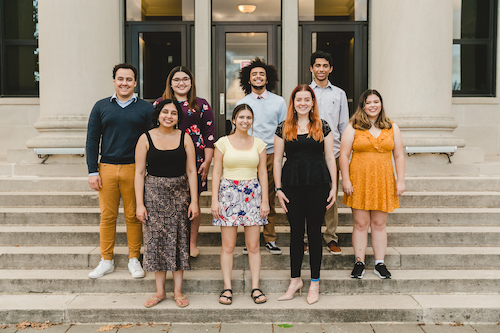 Senior Tess Welch was recognized with the Harlan Hamm award, given to students for their leadership and excellence both in competition and in their academic endeavors and community service. This honor is bestowed on only four students in the state each season.

In the 13 speech categories, WKU students captured all 13 state titles. Freshman Dakota Perry was recognized as the tournament’s top competitor in speech for his success across four different events.

In recognition of these collective efforts, WKU topped the Large School Sweepstakes category in Individual Events and Debate and ultimately was crowned the Kentucky Forensics Association Grand Champion for the 30th consecutive year.

WKU Director of Forensics Ganer Newman was proud of the team’s results. “Our students and coaches worked hard all season long preparing events, developing messages, and improving their argumentation skills. It is great to see their efforts payoff with another KFA State title.”

Despite the state championship, the season is far from over. “Our team members will use the momentum from this win to continue our preparations for the national season,” Newman said.

The WKU Forensics Team will attend at least two national competitions and they will be hosted in different modalities, virtually and in person. “With last year’s sweep of nationals in a virtual modality, we proved we have what it takes to be the best at both and we are very focused on achieving that distinction in 2022,” he said.

The team also competed in the Spring District VI qualifying tournament. The team will compete next at the 6th Online Asynchronous Tournament Series.

Results from the Kentucky Forensics Association State Tournament are as follows:

Results from the District VI AFA-NST Spring Qualifying tournament are as follows: