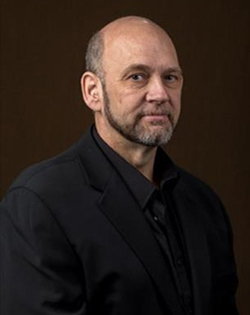 Jon Meyers has a B.A. in film, an M.A. in English, and an M.F.A. in screenwriting.  He is the author of four full-length feature screenplays, most recently Discovering Caroline; four television pilots, most recently Bartleby the Scrivener's Girlfriend; and one narrative podcast/radio script, Edwina Bergman, Radio Ventriloquist.  His feature, Riding Aristotle, was an official selection of the Atlanta Comedy Film Festival in 2019.   His poetry has been published in the Schuylkill Valley Journal.  His experimental hybrid novel/craft book, The World Awaits Your Creative Genius, is slated to be finished by December 2021.

He is the only U.S. Moderator at Into The Script, Great Britain's foremost online screenwriting advice/writing craft hub.  He is a screenwriting panelist for LitCon in New York, where he also serves as their Literary Fiction Genre Manager.  The Jon Meyers Prize for Humour in Gothic Literature is awarded yearly by The Dark Sire, a print and online literary journal.

Every voice matters.  Every student matters.

As a constructivist, I can consider no other tenets and still be true to my pedagogy.  Learning happens when the learner takes a kernel of information and is then actively involved in integrating that information nugget somehow into their own lives, giving meaning to the knowledge they are complicit in constructing.  The student must matter. Their voice must matter.  They are not passive receivers. They are each unique instigators in this community of knowledge creation.  I want them to integrate any text (fiction or non-fiction) into their real everyday lives outside of the classroom.

In 1837, Ralph Waldo Emerson wrote, “The literature of the poor, the feelings of the child, the philosophy of the street, the meaning of household life, are the topics of the time... I embrace the common , I explore and sit at the feet of the familiar, the low.”  I believe this sentiment is as true now as it has ever been.  Academia is best served when we partner with our students, serve alongside them, and prepare them to be participant citizens in their community.  All that means is I leave them better than I found them.

As a Krashen-ite, I believe student learners are more successful when we remove as many affective filters from the classroom as possible. The best way to remove distractions is to build a community of mutual support.  When everyone lifts everyone else up, they are your ally and you are their ally in learning.  Ideally, they spot and remove potential distractions themselves.

Can you tell I love what I do?  I remind the students every day that they are going to change the world for the better, and I am filled with gratitude that we are able to share even a mere fifteen weeks together, so that I may help them along the way.